BY Sean O'Brien on May 6, 2020 | Comments: Leave Comments
Related : COVID-19 NEWS, Soap Opera, Spoiler, Television, The Bold and the Beautiful 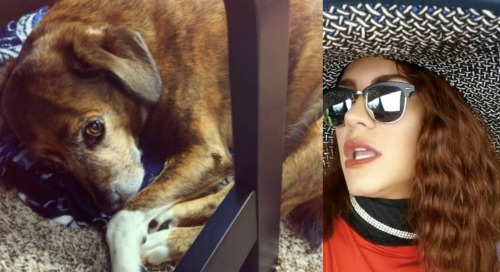 The Bold and the Beautiful spoilers document that Courtney Hope (Sally Spectra) posted an adorable photo of her now eleven-year old dog on Instagram. In her post Hope said, “I wasn’t a dog person (yes I know), I was afraid of them and detached from their love because of it. I didn’t realize I was missing key components of what love and connection mean.

As the B&B star detailed in her post, “Look at that face.”, heart eyes emoji inserted. “This was her keeping me company for 6 hours during acting class last night (after patiently waiting outside my door for four hours while I recorded VO).”

VO is short for Voice-over, which is another part of the entertainment industry that Hope has excelled in.

Earlier this year she earned a Best Acting in a Game award, for her performance as Jessie Faden in Remedy Entertainment’s video game, Control. Hope appears in video graphic form as Jessie, while providing the voice for that character.

Bold And The Beautiful Spoilers – Courtney Hope Works For Success

Hope’s entertainment career began in 2000, when she appeared as Molly on an episode of Walker, Texas Ranger, which starred Chuck Norris.

Savvy fans know that successful entertainers are always seeking to develop their skills. Hope’s comments about six hours of acting class demonstrate her desire to be better, even though she’s a regular contract player on a popular soap opera that is seen around the world.

The fans admire Hope’s success, while also realizing that she’s maintaining it, and striving toward the future.

Hope’s endearing post about her dog, who she refers to as Stevie Nicks, is just another reminder of how social media is allowing B&B’s cast to stay in touch with fans during the production shutdown.

This post, along with those of other actors, allow fans to remain connected to the actors they’ve grown deeply attached to. Together, everyone is hoping that the current virus restrictions will lessen, allowing Hope and all of her soap colleagues to return safely to work in the near future.

Look at that face 😍. This was her keeping me company for 6 hours during acting class last night (after patiently waiting outside my door for four hours while I recorded VO).. My side kick, soulmate, little girl, best friend, my guide, my student, my teacher, my therapist, my mirror and my shadow. Life changed the moment she came into my life and I’m a better, more loving person because of her. I wasn’t a dog person (yes I know), I was afraid of them and detached from their love because of it. I didn’t realize I was missing the key components of what love and connection meant. But something powerful happened inside my soul when I laid eyes on her at 3 months old and I knew I needed to rescue her…But what I didn’t know was we needed to rescue each other 🙏🏼💕… From that day I’ve never felt alone because I had her, and because she taught me how to truly love myself. How live alone, be by myself and thrive. Thanks for loving me so deeply, listening to my energy and making me feel understood, kissing my tears, running beside me in excitement for life, and showing me the beauty of this world in ways I never expected, because you are undoubtedly my everything miss Stevie Nicks. 😘 Just an animal appreciation post. #11yearsyoung #MissStevieNicksHope #MyWiseGirl