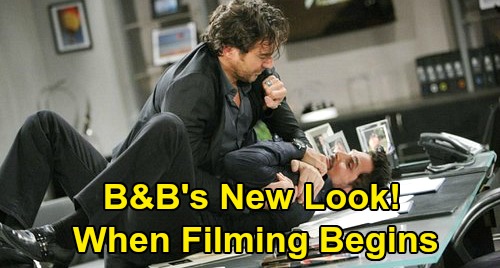 The Bold and the Beautiful spoilers tease that production is now allowed to resume, but there are some issues that must be finalized before B&B actors can actually return to the set. Whenever that does happen, which could be as soon as this month, distancing rules will force a change in the way performances take place and the look of scenes that are created.

Examples across all paused storylines can be offered regarding which actors are able to be present, how close they can be to each other while filming, what type of scenes are possible, along with a variety of other issues that will come into play.

Soap operas routinely record what amounts to many pages of script per shooting day. Incorporating distancing rules, along with other safety protocols, will make what those within this genre accomplish all the more impressive.

Bold And The Beautiful Spoilers – Ridge Forrester Banned From Kissing

When last they were seen, Ridge was talking with Brooke at her palatial estate. She had the Forrester Creations pilot find and retrieve her husband from Las Vegas, Nevada, where he was partying with Shauna on the strip. He and Brooke won’t be kissing either, if they reconcile.

Eric Forrester (John McCook) won’t be able to host Bridge’s vow renewal ceremony, which assumes that Brooke and Ridge would iron out their problems. Of course, many weddings have been held at that fabled location as well.

Queric was at odds when viewers last saw Eric and Quinn Forrester (Rena Sofer). It’s assumed that McCook will be able to return to the set in some capacity, though he’s in a category of individuals who’s considered at higher risk due to age.

Any actor, regardless of birth year, is also considered to be in a higher risk category if they have underlying health issues as well.

Bold And The Beautiful Spoilers – Bill Spencer’s Face Is Safe

Bill Spencer (Don Diamont) and Ridge have been involved in multiple physical conflicts through the years. Kaye’s character took his most recent punch at Diamont’s alter ego after learning the he kissed Brooke in the cabin.

Clearly, the type of physical conflict that viewers have seen Ridge and Bill engage in won’t be feasible for the foreseeable future. So these two longtime enemies will likely only be able to offer pained looks, or offer dismissive comments to each other from across a room.

Hopefully conditions improve as soon as possible, which then allows the actors, their off-screen colleagues, and all who watch them to return to what were considered normal times.