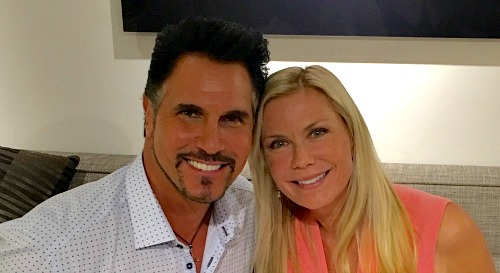 The Bold and the Beautiful (B&B) spoilers tease that Bill Spencer (Don Diamont) will have revenge on his mind. B&B fans know Quinn Forrester (Rena Sofer) mainly wanted to target Brooke Forrester (Katherine Kelly Lang), but she was fine with letting others get caught in the crossfire. Quinn’s feud with Brooke did some serious damage to both “Bridge” and “Batie.”

Of course, that may not be possible after how many times Katie’s been burned. There are also some deeper issues that Bill and Katie may need to explore in their upcoming conversation.

Katie and Bill need to get honest about their relationship, which is exactly what they’ll do during the week of April 20-24. In a new issue of Soap Opera Digest, Don Diamont opened up about “Batie’s” problems as well as what might be ahead for Quinn.

“He hasn’t married Katie again,” The Bold and the Beautiful actor pointed out. “He will always love her. She is the mother of his son, but maybe there isn’t something there that needs to be to take this leap again. That remains to be seen as well.”

There’s a chance Quinn just sped up their inevitable split, but any good that might’ve come out of it may not matter to Bill. He’s a vengeful man, so Quinn could easily find herself on the receiving end of Bill’s retaliation.

“Quinn is a self-loathing witch who only has her self-interest at heart,” Diamont insisted. “Bill is pissed. Will there be some hell for her to pay? I would certainly think he would go after her. That’s usually how he operates.”

That’s especially true if Bill and Katie’s breakup sticks, which will leave Bill without much to do. Bill puts Quinn on notice with a fierce threat on April 15, so he may follow through on that at some point.