The Bold and the Beautiful Spoilers: Douglas In Trouble – Should Taylor Come Back & Fight Hope For Her Grandson?

BY hellodrdavis on March 17, 2020 | Comments: one comment
Related : Soap Opera, Spoiler, Television, The Bold and the Beautiful 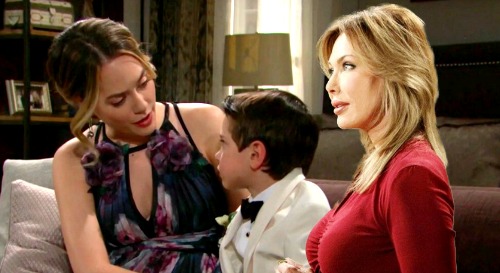 But we can’t forget that this is coming very quickly after Douglas was seriously begging Hope to marry Thomas Forrester (Matthew Atkinson). Sure, Thomas was pressuring him to do it, but Douglas also seemed to be genuinely horrified by the thought of Thomas marrying Zoe Buckingham (Kiara Barnes) and losing Hope as a mother. Now he seems to have bounced right back from that, which seems suspect.

Plus, we can’t forget how much Douglas has been through in the past year. His mom Caroline Spencer (Linsey Godfrey) died, he moved to Los Angeles, his father manipulated him, he got a new mom, his father manipulated him some more, he nearly got a new step-mom that he didn’t want, and he watched everyone gang up on Thomas at the wedding. That’s a lot for a little kid to endure.

We have to wonder what Taylor Hayes (Hunter Tylo) would be saying and doing about all of this, and about where Douglas will be living for the foreseeable future. Surely she wouldn’t be happy with the prospect of Hope raising her grandson, and as a psychiatrist it would seem that she’d probably be worried about Douglas’ level of confusion at this point.

As it stands, everyone on the current B&B character landscape seems to be ok with Hope and Liam raising Douglas as their own child. In the wake of Thomas’ actions, even Ridge Forrester (Thorsten Kaye) seemed to be all right with Douglas becoming a permanent part of Hope and Lam’s family, and he was always the biggest champion of Thomas raising the little boy.

But if Taylor were around, would she just fall in line with everyone and think that Hope was within her rights to assume the care of Douglas? She might not – in fact, she might just take issue with exactly how Hope and Thomas got to the point that they’re at.

After all, Thomas isn’t the only one in the picture who manipulated. Hope manipulated Thomas to get him to sign the custody papers and presented him with some false pretenses – that they’d be a family together with Douglas.

Suffice it to say that Taylor is not a big Hope fan, and she’d probably be quick to point out that Thomas got used in this equation too. In fact, she might even go so far as to say that Hope is unfit – after all, she did push Thomas into a vat of acid and then conspire to hide that fact from Ridge and the police.

Actually, it’s not out of the realm of possibility that Taylor would fight for custody of Douglas herself, or strongly suggest that Steffy Forrester (Jacqueline MacInnes Wood) should be the person raising Douglas instead of Hope.

At any rate, it doesn’t look like Taylor will be back anytime soon, but it’s pretty easy to imagine the situation with Douglas going very differently if she were present.

What’s your take? Do you think that Hope and Liam would be raising Douglas if Taylor were currently on the B&B scene? Keep watching the Bold and the Beautiful and know that CDL is your place for all the latest B&B recaps, news, and spoilers.