The Bold and the Beautiful Spoilers: Wednesday, March 18 – Dr. Escobar’s Urgent Texts To Sally – Shauna’s Got a Secret

BY hellodrdavis on March 17, 2020 | Comments: 2 comments
Related : Soap Opera, Spoiler, Television, The Bold and the Beautiful 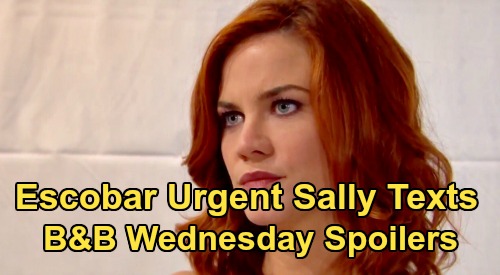 The Bold and the Beautiful spoilers for Wednesday, March 18, tease that Shauna Fulton (Denise Richards) will have some interesting news to impart to Quinn Forrester (Rena Sofer). It looks like Shauna will pay Quinn a visit at the Forrester mansion with some questions about how the wedding of Thomas Forrester (Matthew Atkinson) and Zoe Buckingham (Kiara Barnes) went. And will she get an earful!

Of course, Shauna was under the impression that if Thomas married Zoe, then Ridge Forrester (Thorsten Kaye) and Brooke Forrester (Katherine Kelly Lang) would likely reunite, since that would mean that Thomas was moving on with his life and away from Brooke’s daughter Hope Logan (Annika Noelle). Shauna will probably be initially hopeful when she hears that Thomas and Zoe didn’t actually get married, but then she’ll hear the rest of the story.

Quinn will likely update Shauna on how Ridge publicly apologized to Brooke after the wedding fiasco, and Quinn might also know that Ridge didn’t come back home to the Forrester mansion that night. That will probably crush Shauna, who will realize that Brooke and Ridge have reunited and spent the night together. Shauna’s in love with Ridge, so she’ll be disappointed, but she’ll probably state once again that she just wants Ridge to be happy.

Well, it seems that Quinn won’t be the only one with some news to share. According to B&B spoilers, Shauna will mention something very intriguing to Quinn. Shauna will say that she saw something recently, and that she doesn’t know if she should say anything about it. That will pique Quinn’s curiosity, and of course she’ll urge her good friend Shauna to spill what she saw.

Now, whether or not Shauna will spill what she saw on Wednesday’s episode remains to be seen, but B&B spoilers indicate that what Shauna saw was the kiss that Brooke shared with Bill Spencer (Don Diamont) on the night before the wedding. Of course, how and why Shauna would have been at Hope’s cabin to witness the kiss will need to be explained, but it certainly looks like she witnessed “Brill’s” lip lock.

Additional B&B spoilers say that a video of Brooke and Bill’s kiss will surface at some point, too, so it’s possible that Shauna had the presence of mind to whip out her phone and record what she saw that night. And when Quinn gets hold of that…well, look out Brooke!

Meanwhile, on the new episode of B&B on Wednesday, March 18, Sally Spectra (Courtney Hope) will find herself in a bind. Sally knows that she doesn’t have much time left due to her terminal illness, and she wants to make every moment with Wyatt Spencer (Darin Brooks) count. Sally’s really focusing on living life in the moment and focusing on the present, and so when she starts getting pesky texts from her treating physician, she’ll reel.

According to the Bold and the Beautiful spoilers, Sally will choose to ignore Dr. Penny Escobar’s (Monica Ruiz) texts, but it doesn’t look like Dr. Escobar is going to give up on trying to reach her patient. She’ll need to get in touch with Sally, perhaps to arrange palliative care, or even for more pressing concerns. She could even have news about a new clinical trial or other new treatment options that have opened up.

But whatever the case, Sally will do her best to ignore the incoming texts. Unfortunately for her, it seems that Wyatt will notice the flurry of texts that Sally isn’t answering, and he’ll start asking questions about what’s going on. And of course, we can’t forget that Wyatt knows about Sally’s illness, but Sally doesn’t know that Wyatt knows. It should lead to an interesting interaction as Sally dodges Wyatt’s questions.

Ongoing B&B spoilers for later in the week say that Sally will eventually confess her diagnosis to Wyatt, so it seems that in the end she won’t be able to dodge both Dr. Escobar and Wyatt successfully. Perhaps the situation on Wednesday’s episode will start to get to Sally and she’ll realize that she needs to be honest with Wyatt.

It sounds like a lot of B&B drama is heating up for Wednesday’s episode. Stay tuned and remember that you can count on CDL for the latest Bold and the Beautiful spoilers and updates. We’ll be sure to let you know as more B&B news comes in.