BY hellodrdavis on March 16, 2020 | Comments: 3 comments
Related : Soap Opera, Spoiler, Television, The Bold and the Beautiful 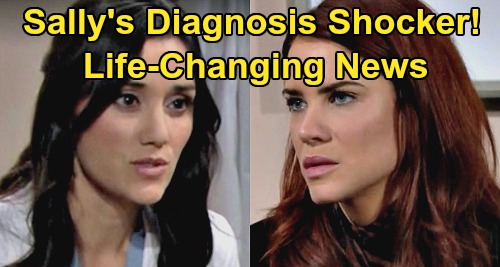 The Bold and the Beautiful (B&B) spoilers tease that Sally Spectra (Courtney Hope) will soon find herself in a bind. She’s currently keeping a big secret from Wyatt Spencer (Darin Brooks)…or so she thinks. Sally’s under the impression that nobody but Katie Logan (Heather Tom) knows about her terminal illness. But as B&B viewers know, Katie has told several people about Sally’s diagnosis, including Wyatt.

Sally’s clearly struggling with the diagnosis and isn’t thinking rationally, and all she thinks she’s got right now is her time with Wyatt. Sally just wants to be “in the moment” and enjoy their time together to the fullest. Well, that’s going to get difficult when a couple things start happening. First, Sally will start getting messages from her doctor, Penny Escobar (Monica Ruiz).

As B&B viewers know, Sally isn’t keen on getting medical treatment and palliative care for her illness, since she doesn’t want to spend her remaining days in medical offices and drugged up. Sally will apparently think that Dr. Escobar is sending her messages to pester her about follow-up care.

And then it seems that Wyatt will notice that Sally’s getting a lot of messages, and he’ll have some pointed questions for her. Of course, Sally will think that Wyatt has no idea about her diagnosis, but really Wyatt knows, and he’ll be asking questions hoping that Sally will finally open up and reveal her illness to him.

The bottom line here is that Sally is going to keep ignoring Dr. Escobar’ messages, which will apparently result in Dr. Escobar sending even more urgent messages. Dr Escobar will clearly want to get hold of Sally for some reason.

So that makes us wonder – could Dr. Escobar have information for Sally about some of her test results that’s beyond simply wanting Sally to come in for follow-up care and end-of-life planning?

It’s not out of the realm of possibility that Sally could be told that she actually has longer to live than the doctors first thought. Sally hightailed it out of the doctor’s office pretty quickly after she got the news about her diagnosis, and she hasn’t gone back to the doctor since, so you never know what the medical team could have found in the interim.

Another possibility is that a new experimental clinical trial has opened up that could save Sally’s life. Remember that previously, Dr. Escobar told Sally that there were no treatments or clinical trials available to her, but that could have changed. After all, new trials emerge every day, and Sally could have suddenly become a candidate for some new, exciting research.

And there’s a third possibility here, too, and that’s that the medical team could have made a terrible mistake and Sally’s illness isn’t terminal after all. That would certainly warrant Dr. Escobar sending urgent messages to Sally!

At any rate, B&B spoilers say that Sally will eventually crack and reveal her diagnosis to Wyatt, so perhaps he will be able to talk her into returning Dr. Escobar’s messages and solving the mystery of why she’s been urgently trying to reach Sally. Maybe there’s good news for Sally after all – we’ll keep our fingers crossed!

Do you think that Sally will get good news from Dr. Escobar? Stay tuned to the Bold and the Beautiful, and remember that CDL is your place for the latest B&B spoilers and news.