The Bold and the Beautiful Spoilers: Sally’s Horrific Discovery – Finds Out Wyatt’s Cheating With Flo?

BY hellodrdavis on March 14, 2020 | Comments: 2 comments
Related : Soap Opera, Spoiler, Television, The Bold and the Beautiful 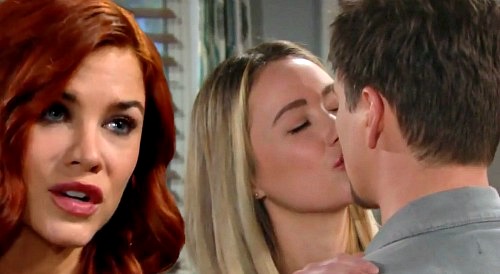 The Bold and the Beautiful (B&B) spoilers tease that Sally Spectra (Courtney Hope) could soon make an infuriating discovery. As B&B viewers know, Wyatt Spencer (Darin Brooks) recently rekindled his relationship with Sally and asked her to move back in with him. This came after Katie Logan (Heather Tom) told Wyatt about Sally’s terminal illness. Wyatt really cares about Sally, and he just couldn’t bear the thought of her living out the final days of her life alone.

So Wyatt told Sally that he loved her and that he wanted to get back together. That made Sally deliriously happy and she accepted his offer. Now she’s back living with Wyatt and they’re in a tenuous position, as Wyatt knows about Sally’s illness, but Sally doesn’t know that Wyatt knows.

Sally also doesn’t know that Wyatt is head-over-heels in love with Flo Fulton (Katrina Bowden) and that he really wants to be with her. It all seems like a big recipe for disaster. And according to B&B spoilers, Wyatt is going to battle some serious guilt as he continues to see Flo behind Sally’s back.

Of course, Flo’s going to want updates on how Sally is doing, as it was partially her idea for Wyatt to get back together with Sally in order to make her final days worth living. But for Wyatt, the guilt will apparently really get to him.

Well, something tells us that the situation with Wyatt, Sally, and Flo could take a terrible turn. The Bold and the Beautiful spoilers say that Sally will eventually crack and confess her illness to Wyatt.

And while it’s unclear exactly how Wyatt’s going to respond, it’s likely that he’ll try to pretend like he’s hearing about her tragic news for the first time – after all, he’s probably not going to want Sally to know that he got back together with her while he knew that she was sick.

But even after Sally confesses her diagnosis to Wyatt, Wyatt will still be in a terrible bind. He’ll be carrying the secret that he loves and wants to be with Flo, and it looks like he’ll still manage to see Flo from time to time. And this leads us to wonder how long he’s going to be able to do that without Sally finding out about it.

Imagine the terrible scene if a dying Sally were to catch Wyatt with Flo…after she knows that Wyatt knows about her illness. Yikes – Wyatt would look VERY bad in Sally’s eyes, and if she caught them together, then he’d end up between a rock and a hard place.

Wyatt Would either look like a callous jerk for seeing Flo behind Sally’s back, or he’d have to confess that he knew she was sick before he reunited with her.

Neither of these options is good, and if it does come down to Sally catching him with Flo, then it’s going to be a very bad scene all the way around. Wyatt could end up completely alienating a dying Sally from one of her only real sources of support…him!

We’ll see what happens here, but if Wyatt keeps seeing Flo, which it looks like he will, then there’s probably a good chance Sally will catch him. And all of Wyatt’s good intentions for Sally will be down the drain. Do you think that Sally will catch Wyatt cheating on her with Flo?

It looks like we’re in for some exciting developments on the Bold and the Beautiful. Stay tuned to the CBS soap, and we’ll keep you up to date on the latest B&B news. Remember to visit us often at CDL for all your B&B spoilers and updates.