The Bold and the Beautiful Spoilers: Thomas Fights for Zoe’s Love After Wedding Disaster – Wins Back Woman Who Truly Wants Him? 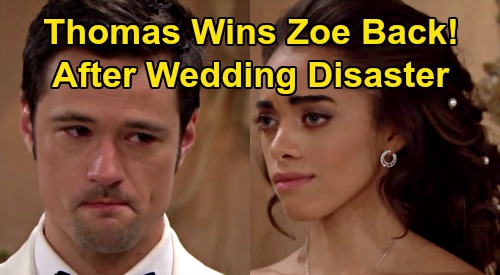 The Bold and the Beautiful (B&B) spoilers tease that Thomas Forrester (Matthew Atkinson) will have no choice but to let go of his dream. B&B fans know Thomas has been fighting hard to be with a woman who just doesn’t want him. Hope Logan (Annika Noelle) loves Liam Spencer (Scott Clifton) – and she certainly doesn’t approve of how Thomas has used Douglas Forrester (Henry Joseph Samiri) in his plots.

After Hope’s wedding charade and the fiasco that followed, it should become crystal clear to Thomas that his “Thope” plans are kaput. There’s a chance B&B will pair Thomas and Hope up one day, but it definitely won’t be while Thomas is so devious.

It would have to be at some point in the future after Thomas is reformed – and even then, it would take Hope forever to trust him.

Thomas has really blown it since he had a perfectly good bride who actually wanted him. Zoe Buckingham (Kiara Barnes) fell hard for Thomas and wanted to build a life together. Her sweet vows proved her devotion and offered a glimpse of the authentic love that Thomas could’ve had.

Once Thomas has an opportunity to reflect after this wedding mayhem, will he battle remorse and be able to reform? Thomas will surely be angry with Hope for duping him and exposing his true colors but he could move past that.

It’d be nice if this finally ended Thomas’ bizarre Hope obsession once and for all. The Bold and the Beautiful has gotten as much drama as they can possibly get out of that infatuation angle. It’s time to let it go and try something else.

None of that’s happened just yet. All B&B fans have seen is the same old twisted Thomas manipulating Zoe as part of his Hope scheme. Hope has always been Thomas’ endgame.

With that in mind, it could mean Thomas will decide he had it all wrong. He may see that Zoe’s the one for him and undertake a new mission: Operation Win Back Zoe. That’s going to take some serious work thanks to this wedding blowup.

Zoe knows Thomas used her in hopes of getting the woman he really wanted, so she should completely reject the idea of a reunion. Zoe has to have some dignity here – she already told Thomas she wasn’t going to be a ‘consolation prize.’ However, if Thomas can actually change and prove he wants a real future with Zoe, there could be hope for these two since she does love him.

The Bold and the Beautiful spoilers say Thomas will make some updates to his life and hopefully show a better side of himself. That could be good news for Zoe if she decides to take another chance on love.

Do you think Thomas will ultimately realize what a mistake he made? Could Zoe ever take Thomas back? Don’t forget to check back frequently for more B&B news and updates. CDL will have other hot Bold and the Beautiful spoilers to deliver.