BY hellodrdavis on March 17, 2020 | Comments: one comment
Related : Soap Opera, Spoiler, Television, The Bold and the Beautiful 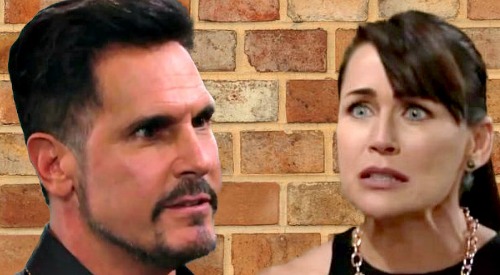 The Bold and the Beautiful (B&B) spoilers tease that Quinn Forrester (Rena Sofer) will be thrilled when she gets the ammunition that she needs to take Brooke Forrester (Katherine Kelly Lang) down. As B&B viewers know, Quinn has been itching to ruin Brooke somehow, but thus far she hasn’t had a means to do so.

Quinn’s basically been waiting for a good opportunity to strike. Well, according to B&B spoilers, Quinn will have some choice information fall right into her lap when she’s catching up with Shauna Fulton (Denise Richards).

Quinn will meet up with Shauna and tell her all about what happened at Thomas Forrester (Matthew Atkinson) and Zoe Buckingham’s (Kiara Barnes) wedding, zeroing in on the part where Brooke and Ridge Forrester (Thorsten Kaye) appeared to be on the verge of reconciling.

At that point, Shauna will share something with Quinn. She’ll tell Quinn that she recently saw something, and that she doesn’t know if she should say anything about it. Of course, Quinn will get the information out of her, and as it turns out, Shauna will reveal that she witnessed Brooke’s passionate kiss with Bill Spencer (Don Diamont) on the evening before Thomas and Zoe’s wedding.

Quinn’s going to be thrilled to get her hands on this shocking information, but what’s she going to do with it? Quinn will certainly want to be strategic about how and when she drops this bomb. She’ll want to play her cards just right.

And there’s a chance Quinn will even want to make matters worse before she lets the shocker explode – in fact Quinn will get her hands on a video recording of the ‘Brill’ kiss. After all, Ridge kissed Shauna during his latest round of marriage drama. A “Brill” kiss might be something Ridge could get past, so Quinn might want to pile on the temptation and spark a forbidden hookup if she can.

Then again, things are a little different when it comes to Bill and Brooke. Shauna’s still someone Ridge is getting to know. Ridge certainly enjoys Shauna’s company when they’re together, but he’s not in love with her.

It’s Brooke who still has Ridge’s heart. With Brooke, how can Ridge be so sure her heart’s not still with Bill? A kiss might be enough to break “Bridge” considering all the history Bill and Brooke have.

Regardless, the Bold and the Beautiful spoilers say Quinn will be brimming with confidence. She’ll fully believe she can destroy Brooke with her newfound info, but that could be risky.

Quinn could also destroy Katie Logan (Heather Tom) with her exposure plan, so that’ll be two heartbroken Logans. You can bet Bill isn’t going to appreciate that, which could mean bad news for Quinn!

After Quinn strikes her next blow, the Bold and the Beautiful spoilers say Bill will have to plot his next move. It’s easy to imagine Bill retaliating, especially since he may not have much left to lose.

If Quinn blows up his family with Katie and Will Spencer (Finnegan George), Bill won’t have to stay on the straight and narrow anymore. He can get back to being the scheming “Dollar Bill” we all know and love.

Whatever the case, B&B fans can expect Quinn to take this secret and use it to her advantage. Her victory may be short-lived if Bill has anything to say about it!