The Bold and the Beautiful Spoilers: Eric Divorces Quinn, Rebounds With Donna Logan? 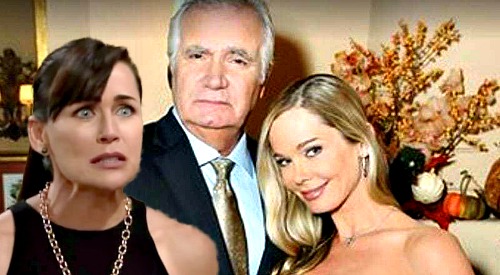 The Bold and the Beautiful spoilers tease that Eric Forrester (John McCook) has remained fond of Donna Logan (Jennifer Gareis) years after their marriage ended. A recent after hours conversation they had at Forrester Creations centered on Quinn Fuller Forrester’s (Rena Sofer) behavior.

Donna doesn’t trust Quinn. Eric says that she frustrates him. The topic of Quinn outing Donna’s sister, Brooke Logan (Katherine Kelly Lang), during the intended Bridge reunion party, fueled their commiseration session. But it might also wink at what’s to come on B&B.

Eric offered a reaction shot that he and the audience understood. That came after Donna expressed her opinion that Shauna Fulton (Denise Richards), which isn’t that character’s current name, wouldn’t be with Ridge Forrester (Thorsten Kaye) in a million years. Of course, Donna had no way of knowing what Eric learned earlier that day at the mansion.

Shauna’s declarative statement, that cited her status as Ridge’s wife, was unbelievable. Yet, as Ridge came to realize, through his new spouse’s explanation and review of an old school physical photo, it was true. He had gotten married to Shauna in Las Vegas, Nevada.

Donna and Eric were married for a few years in the late 2000’s. But they’ve also been connected through Brooke and Ridge’s many marriages for decades.

The incredible scenario where Donna actually did lose Ridge as her brother-in-law happened because of a point she was driving home to Eric. She told him that he can’t trust his wife. Donna was right to strongly assert that Quinn has the wool pulled over his eyes and that her fangs are always out.

Bold And The Beautiful Spoilers – Quinn Divorce Is Surely Coming

Of course Eric is going to eventually learn that Quinn coached Shauna. Their efforts made it appear as though Ridge texted a request to Carter Walton (Lawrence Saint-Victor) to file the Bridge divorce papers. Shauna also led a drunken Ridge to the wedding chapel, where he became her husband.

B&B may have presented more than a scene where a formerly married couple shared their feelings about Quinn. Based on Eric’s feelings for Donna and her stated single-status, it’s possible that he’ll rebound to her after Quinn’s actions are known and he kicks her out of his life.

Of course, this projection assumes that Eric wouldn’t rebound to Brooke instead.