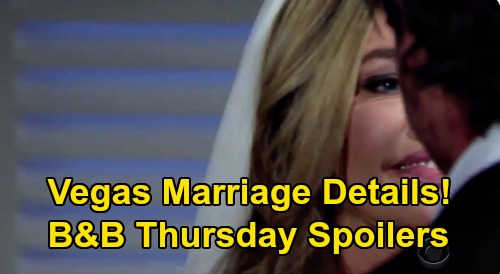 The Bold and the Beautiful spoilers for Thursday, August 13, tease that viewers will get some more details on exactly what happened between Shauna Fulton (Denise Richards) and Ridge Forrester (Thorsten Kaye) in Las Vegas. As B&B viewers know, Shauna and Quinn Forrester (Rena Sofer) are currently toasting their success in finagling Shauna’s marriage to Ridge.

On Thursday’s episode of B&B, it looks like Quinn will press Shauna for details about how the wedding went down.

Given the conversation that Shauna and Quinn have just had, it would seem that Quinn walked Shauna through exactly how to get Ridge divorced from Brooke Forrester (Katherine Kelly Lang) on the same evening that she and Ridge got married.

B&B spoilers reveal that Quinn coached Shauna to text Carter Walton (Lawrence Saint-Victor) from Ridge’s phone while Ridge was otherwise indisposed. Carter thought he was getting instructions from Ridge to file the divorce papers immediately, which he apparently did.

Next, Shauna somehow wrangled Ridge into going to a wedding chapel on the Las Vegas strip, where they got married.

Viewers will see flashbacks from Ridge and Shauna’s marriage, and while Ridge will be inebriated during the ceremony, it looks like he’ll be fully functioning and will appear cognizant enough to the wedding officiant to have a legit ceremony. B&B viewers can expect to see the Ridge/Shauna wedding in flashbacks.

Well, while Shauna is recounting all of the wedding details to Quinn over at the Forrester mansion, it looks like Eric Forrester (John McCook) will probably be spilling to Donna Logan (Jennifer Gareis) what happened with Shauna earlier that evening – that is, how Shauna appeared at the mansion and told Ridge that the two of them were married and that Ridge was divorced from Brooke.

Donna’s going to be horrified, and she’ll surely sense that her sister will need her shortly, especially since she knows that Brooke was planning a big surprise for Ridge.

And speaking of Brooke and Ridge, there’s going to be a bad scene as Brooke tries to absorb what Ridge has just told her. Of course, Ridge doesn’t have many details about how this wedding to Shauna came about, since he was blacked out drunk for most of that evening.

The Bold and the Beautiful spoilers say Brooke is going to want answers, and she should be sufficiently frustrated as Ridge can’t really give her answers, especially about why he decided to text Carter to file the divorce papers.

Of course, B&B viewers know that Ridge didn’t really ask for those divorce papers to be filed, but Ridge won’t know that…as far as Ridge knows, he sent Carter the text saying to process the papers and caused the divorce to take place.

Well, it seems that Brooke is going to be horrified by the whole story and likely sufficiently angry with Ridge, but she’ll also tell Ridge that he can’t just take Shauna’s word for what happened in Las Vegas. It looks like Brooke will insist that Ridge try to get to the bottom of what happened.

We’ll see what happens from here with Brooke and Ridge. B&B spoilers indicate that Ridge will end up taking his marriage and his commitment to Shauna seriously, so that doesn’t bode well for “Bridge’s” relationship going forward.

The Bold and the Beautiful spoilers tell us that Brooke will eventually wisen up and realize that Shauna doesn’t really have the conniving streak to pull something like this off herself, but unfortunately for Brooke, the fact will remain that she’s lost Ridge for now.

Thursday’s episode of B&B sounds terrific, so stay tuned! We’ll give you updates as B&B news comes in. Stick with the CBS soap and don’t forget that CDL is your go-to source for all the latest B&B news, hot spoilers, and daily episode recaps.