The Bold and the Beautiful Spoilers Next 2 Weeks: Tragedy Hits Logans and Forresters Hard – Bill’s Revenge on Baby Swap Schemers 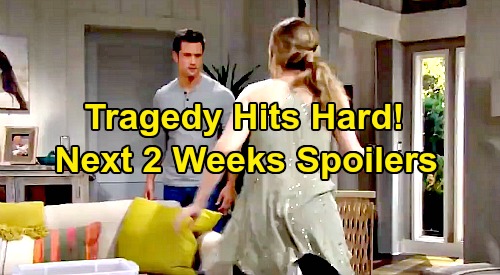 The Bold and the Beautiful (B&B) spoilers for the next two weeks that loyalties will be tested and schemes will bring drama. During the week of August 19-23, Hope Forrester (Annika Noelle) will finish unleashing her fury on Florence “Flo” Fulton (Katrina Bowden). When she’s done, Ridge Forrester (Thorsten Kaye) will see to it that Flo goes down for her crimes.

As Flo’s arrested in front of a distraught Shauna Fulton (Denise Richards), Wyatt will find himself conflicted. Flo deceived his brother and two of his exes, so this was a tough betrayal for Wyatt. Hope and Liam Spencer (Scott Clifton) endured great pain thanks to Flo, and now Steffy Forrester (Jacqueline MacInnes Wood) is in agony, too.

Still, Wyatt will have some sympathy for Flo. His love for her will bubble back up and perhaps leave him wanting to support her. Meanwhile, Detective Alex Sanchez (Jeremy Ray Valdez) will want answers regarding Emma Barber’s (Nia Sioux) death. He’ll think Thomas Forrester (Matthew Atkinson) can provide those answers, but tracking Thomas down will prove difficult.

Ridge will deal with Detective Sanchez’s questions and fret to Brooke Forrester (Katherine Kelly Lang) later. He’ll feel like he’s failed Thomas as a father, so Brooke will offer reassurance. She won’t blame Ridge for the horrible choices Thomas has made, but more are on the way! Thomas will learn Hope’s having their marriage annulled, so he’ll fly off the handle and decide she simply must be his wife.

The Bold and the Beautiful spoilers say Thomas will also reconnect with Douglas Forrester (Henry Joseph Samiri) again, but it won’t be a happy reunion. After Amelia (Nicola Posener) hands the kid over, Thomas will rip into his son for blabbing about Beth Spencer (River Davidson and Madeline Valdez). He’ll hope Douglas is pleased with himself for ruining everything, but this devious dad won’t give up.

At the cliff house, terror will fill Hope’s heart. She’ll come face to face with an unhinged Thomas while her panicked mom races to the scene. Brooke will head over while Ridge makes his own trek separately. B&B fans can expect chaos as things spiral out of control with heartbreaking consequences.

During the week of August 26-30, a tragedy will hit for the Logans and the Forresters. The Bold and the Beautiful spoilers say Brooke’s attempt to save Hope will end in disaster, so it sounds like she may be seriously injured. Dr. Jordan Armstrong (Vincent Irizarry) will make his debut to care for an ailing patient, so he’ll do his best to help.

Over with Bill Spencer (Don Diamont), he’ll focus on revenge. Bill will fume over everyone who’s hurt his son and determine that retaliation is necessary. He’ll have Liam’s back, but the strategies he uses could cause concern! We’ll give you updates as other B&B news comes in. Stay tuned to the CBS soap and don’t forget to check CDL often for the latest Bold and the Beautiful spoilers, updates and news.