BY hellodrdavis on March 18, 2019 | Comments: one comment
Related : Soap Opera, Spoiler, Television, The Bold and the Beautiful 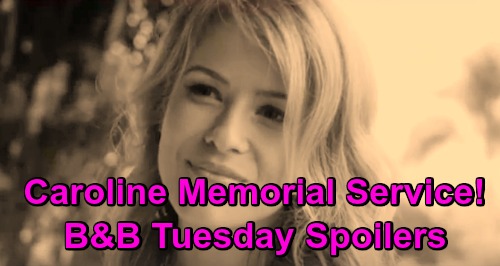 The Bold and the Beautiful spoilers for Tuesday, March 19, tease that Caroline Spencer’s (Linsey Godfrey) family will gather for a formal memorial service. The Forresters, Spencers, and Logans will fondly remember Caroline’s feisty spirit and gentle ways as they say their final goodbyes. And of course, they’ll all have Caroline’s young son Douglas Forrester (Henry Joseph Samiri) on their minds, as he’s just lost his mother.

According to B&B spoilers, some interesting developments will occur concerning Douglas. Taylor Hayes (Hunter Tylo) has just spotted Hope Spencer (Annika Noelle) interacting with Douglas in the Forrester kitchen. Douglas wanted macaroni and cheese just the way his mother made it, and Hope did her best to fill in for Caroline and make Douglas happy.

But it was the emotional connection between Douglas and Hope that really piqued Taylor’s interest. Of course, Taylor is determined to get Steffy Forrester (Jacqueline MacInnes Wood) and Liam Spencer (Scott Clifton) back together, and she’s frustrated that Steffy won’t fight to get her family with Liam back. Taylor would like nothing more than for Hope and Liam to end their marriage, to pave the way for a “Steam” reunion.

And so when Taylor saw Hope and Douglas bonding in the kitchen and talking about Caroline being in heaven, lightbulbs likely went on in Taylor’s mind. B&B spoilers say that Taylor will eventually come to believe that Hope and Thomas Forrester (Matthew Atkinson) would be a good match, and a possible means of breaking up “Lope” and freeing up Liam for Steffy.

According to B&B spoilers, Taylor won’t be the only one who notices an emotional connection between Hope and Douglas. On Tuesday’s episode, Thomas will also observe Hope and Douglas bonding and getting along well, and when Thomas stops to think about it, it will all make sense. After all, Hope has lost a child, and Douglas has lost a mother. They each fill a void for the other, in a way.

In the days to come, it looks like Hope and Douglas will spend more time together. B&B spoilers say that Hope will take Douglas to the cabin for a little adventure, so their bonding time will increase. It probably won’t be long before the two become inseparable, which might cause Liam to worry a bit. Hope has been fixated on Phoebe Forrester (Isabella de Armas and Redford Prindiville) for a while now, and Liam may become concerned that she is now doing the same thing with Douglas.

Of course, Hope and Douglas bonding isn’t a bad thing per se, but Liam may worry that Hope could become too obsessed with Douglas, the way she seemed to be with Phoebe. We’ll see if that happens, but it certainly seems like she could be headed down that path.