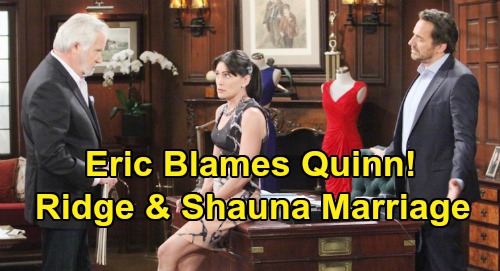 The Bold and the Beautiful spoilers tease that Eric Forrester (John McCook) will be involved in the fallout that involves Ridge Forrester (Thorsten Kaye), Shauna Fulton (Denise Richards), and Quinn Forrester (Rena Sofer). This isn’t speculation, as the actor confirmed what’s ahead during a recently published interview with Soap Opera Digest.

McCook is part of a group of cast members that received recent call backs. So, B&B fans are excited by the anticipated new episodes that could begin airing as soon as mid to late July.

Bold And The Beautiful Spoilers – Return To Work Remains Fragile

The production pause that was necessary after one day of filming appears to have been followed by a smooth week’s worth of work in the studio. After testing protocols were adjusted, all seems to have gone as planned for the actors and crew members who’ve restarted the process of creating daytime drama.

B&B’s new adapted schedule, based on current health conditions, has Monday’s as test days, with Tuesday’s through Friday’s initially established as filming days. The cast and crew is apparently working a shorter work day and is following various implemented safety protocols.

Whether production will be able to continue indefinitely, what happens if an actor, or crew member tests positive, and other issues have yet to be confronted. So time will tell how B&B responds to matters that may arise.

Bold And The Beautiful Spoilers – Eric Forrester Loves His Wife

Love isn’t in question. If it was Eric would have divorced Quinn, as Brooke Logan (Katherine Kelly Lang) insisted in the weeks leading up to the last new episode of B&B, which was broadcast in late April.

However, viewers know that Queric is in a tenuous period. Eric remains disappointed that his wife chose to expose a kiss between Brooke and Bill Spencer (Don Diamont). That decision resulted in Ridge halting Bridge’s reconciliation plans and flying to Las Vegas, Nevada, with Shauna.

Bold And The Beautiful Spoilers – When New B&B Episodes Return

Fans are clamoring to see what happens between Ridge and Shauna. Richards offered a tidbit during a recent interview, where she appeared to confirm that her character and Kaye’s were married in Las Vegas.

Assuming the above is true, then Ridge is potentially married to two women. Although he may have filed the previously completed Bridge divorce paperwork without that information being known.

Eric will not be happy if his son has done something that would obviously be illegal, or if not, legally married Shauna while inebriated in Nevada. And if this has happened, McCook’s character won’t take kindly to Quinn’s anticipated support for Shauna’s marital status.