The Bold and the Beautiful Spoilers: Flo Blames Quinn for Dragging Shauna Down – Wyatt and Flo Relationship Trouble Ahead? 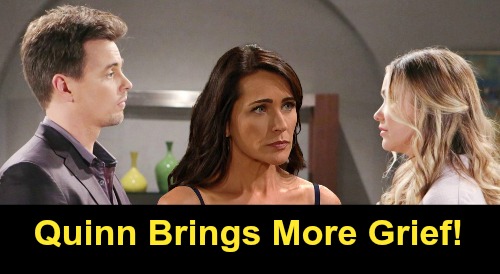 The Bold and the Beautiful (B&B) spoilers tease that the week of October 5-9 is going to be a pretty explosive one when it comes to the situation that Quinn Forrester (Rena Sofer) and Shauna Fulton Forrester (Denise Richards) have gotten themselves into.

As B&B viewers know, Katie Logan (Heather Tom) is about to give Ridge Forrester (Thorsten Kaye) an earful about what Shauna and Quinn did to make his Vegas wedding materialize.

Of course, at this point Ridge has already decided that he just can’t go through with the wedding to Shauna because of his love for Brooke Logan (Katherine Kelly Lang), but he’s going to probably be pretty upset to learn about how Quinn and Shauna finagled his divorce from Brooke in the first place.

But at least Shauna will redeem herself a little bit in Ridge’s eyes by calling Ridge and coming clean about what she did.

The Bold and the Beautiful spoilers say there’s going to be a lot of fallout when the truth about Quinn and Shauna’s manipulation and lies come out.

Of course, Quinn’s going to have a lot of explaining to do to Eric Forrester (John McCook), who will hear the details about the whole divorce and wedding scam from Quinn herself when he overhears one of her conversations with Shauna.

Eric will probably have had it with Quinn at that point, according to B&B spoilers, and Quinn’s going to need the support of the one person who she tends to turn to when thing go south…and that’s her son Wyatt Spencer (Darin Brooks).

But Wyatt’s going to be in an interesting position here, since he’s with Flo Fulton (Katrina Bowden), and Flo might have some pretty negative feelings regarding Quinn.

Let’s face it, once Flo finds out about how Quinn manipulated Shauna into her scheme to get back at Brooke, Flo’s probably not going to be happy about that.

Sure, Shauna’s not innocent here and she knew full well what she was doing when she took Ridge’s phone and got the divorce papers filed, and when she had her wedding chapel friend marry her and Ridge.

But Flo’s probably going to feel like Quinn dragged her mom into the divorce/wedding scam just so Quinn could carry out her own silly revenge on Brooke. And that could put Wyatt and Flo in a difficult situation relationship-wise.

After all, Wyatt probably won’t like it if Flo goes off on his mom, even if he agrees with Flo’s basic stance. It could cause some real tension for Wyatt and Flo.

Of course, the smart thing for Wyatt and Flo to do would be to largely stay out of the whole thing and avoid taking sides. But that might not be possible, since Quinn might need a place to crash if the worst happens and Eric throws her out of the mansion.

That would put Quinn living with Flo and Wyatt, and that could be a real mess.

We’ll see what happens here, but there’s certainly the potential for this Quinn and Shauna mess to take its toll on Wyatt and Flo as well. Do you think that we’ll see trouble in paradise for Wyatt and Flo once it comes out what their moms did?

Stay tuned to the CBS soap and don’t forget to keep CDL at the ready for the latest Bold and the Beautiful spoilers, daily episode recaps, and news. We’re your go-to source for the soaps!