The Bold and the Beautiful Spoilers: Flo Pregnant, Next To Have Baby On B&B? – Wyatt Set For Fatherhood and Marriage 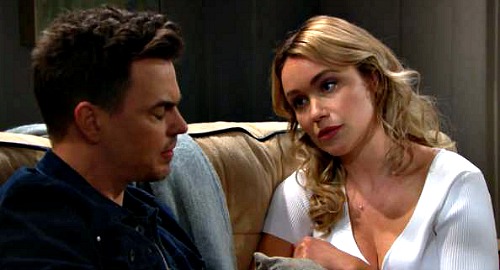 The Bold and the Beautiful spoilers tease that Flo Fulton (Katrina Bowden) may be the next character to have a baby on B&B. As fans have seen, she and Wyatt Spencer (Darin Brooks) are blissfully in love. So projecting that into family status makes daytime sense.

Sally Spectra (Courtney Hope) is out of the picture, with Hope’s exit from the cast now public knowledge. So, nothing stands in the way of Wo, the extremely short nickname applied to Wyatt and Flo’s coupled status.

Bold And The Beautiful Spoilers – Wyatt Spencer Was Expecting A Child

Hardcore B&B fans know that Wyatt was going to have a child with Hope (as then played by Kim Matula). But that one-time couple suffered the loss of their unborn child, who they named Dylan Spencer, through a miscarriage.

Digitally skipping years ahead in plot time to the summer of 2020, Wyatt has again reunited with the true love of his life. A very reasonable projection would have Flo conceive Wyatt’s child and for this modern couple to celebrate that birth in the late spring of next year.

Flo arrived in Los Angeles, California, as Reese Buckingham’s (Wayne Brady) significant other. She didn’t know that he was committing a crime when she first saw the baby in his apartment.

That child was Beth Spencer (Madeline Valdez and River Davidson), who Reese had stolen from Hope and Liam Spencer (Scott Clifton) when she was born on Catalina Island.

With the baby scam storyline long past and Flo’s reveal as a member of the Logan family also retro news, Bowden’s character is fully established as the actor heads toward her two-year anniversary with the cast this coming January.

An uplifting storyline is fitting for this resilient couple after all of the drama Wyatt and Flo have endured. Their backstory has been filled in, fans know where they’ve been within the last year-plus, and current times appear to be greenlighted. Marriage seems in order.

Katie Logan (Heather Tom) would be a solid choice as Flo’s maid of honor. Of course Liam would be Wyatt’s best man. Shauna Forrester (Denise Richards) would be the mother of the bride, with Ridge Forrester (Thorsten Kaye) and Bill Spencer (Don Diamont) making nice during the nuptials.

Quinn Fuller Forrester (Rena Sofer) would also be overjoyed on that happy day. Yes, a Wo wedding would work this fall on B&B.