The Bold and the Beautiful Spoilers: Flo Steps Aside – Lets Sally Die In Wyatt’s Arms?

BY hellodrdavis on February 8, 2020 | Comments: 3 comments
Related : Soap Opera, Spoiler, Television, The Bold and the Beautiful 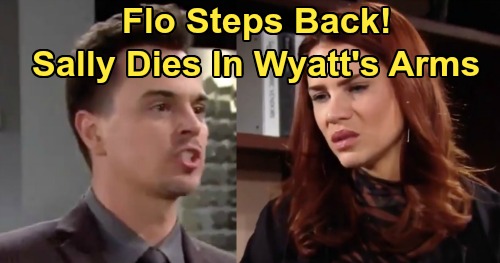 The Bold and the Beautiful (B&B) spoilers tease that Flo Fulton (Katrina Bowden) may soon have a big decision to make. As B&B viewers know, Sally Spectra (Courtney Hope) is on the verge of getting a devastating medical diagnosis. Exactly what disease or condition Sally has remains to be seen, but B&B spoilers are clear that the diagnosis is terminal. In fact, the new B&B promo indicates that she has very little time left to live.

Obviously, this news will be horrifying for Sally to hear and process. She’ll face complete devastation as she tries to fathom having about a month left of her life. All of her hopes and dreams will never be realized, and she’ll feel more alone than ever as she has to make end-of-life preparations and get her affairs in order.

Well, according to B&B spoilers, there will be someone else who’s going to have a very hard time with the news about Sally’s terminal condition, and that’s Wyatt Spencer (Darin Brooks).

The Bold and the Beautiful spoilers say that Katie Logan (Heather Tom) will break Sally’s confidence, feeling that Wyatt needs to know the truth about what Sally’s going through.

So, Katie will tell Wyatt about Sally, and he’ll be absolutely devastated. He’ll surely be feeling a mix of emotions, from extreme sadness to disbelief that he left Sally right before she got handed this horrible fate. He’ll be feeling overwhelmed, and Flo will step in to offer him comfort and support in his time of need, and as he struggles to figure out how to approach Sally and what to do.

One wonders, too, what Flo will end up doing. Clearly, she and Wyatt want to be together. They consider each other to be soulmates, and they’re the love of each other’s lives.

But they probably won’t feel like having a joyous reunion while Sally is going through this struggle. And in fact, Wyatt may decide that he needs to be there for Sally, since she really doesn’t have anyone else to take care of her.

We could see a situation where Wyatt and Flo simply put their relationship on hold for the time being, so that Wyatt can be there for Sally during the last weeks of her life.

If Sally would agree, Wyatt would probably feel good about caring for Sally and tending to her as she deals with her inevitable fate. But that would mean that Flo would need to step back for a while and give Wyatt and Sally some space.

We’ll see what happens here, but it’s a delicate situation. Perhaps after the initial shock of her diagnosis has worn off, Sally will find it within herself to accept Wyatt’s support, while Flo steps aside and lets Wyatt be there for his former fiancé. It would be touching if Wyatt were there with Sally during her final moments to comfort her.

What do you think will happen here? Will Sally let Wyatt give her his support during this difficult time? Stay tuned to B&B and don’t forget to check CDL often for the latest Bold and the Beautiful spoilers, updates, and news.