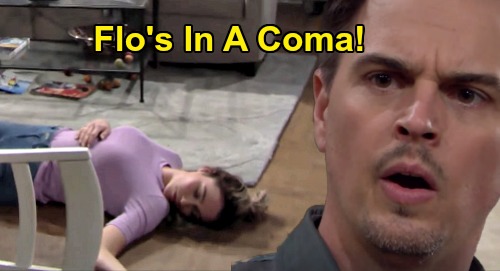 The Bold and the Beautiful spoilers tease that Sally Spectra (Courtney Hope) can actually keep her health lie going. Just because Wyatt Spencer (Darin Brooks) may catch Hope’s character and her violent doctor friend in his living room doesn’t mean that Sally’s prank will be exposed.

As B&B fans saw, Flo Fulton (Katrina Bowden) was out cold on Wyatt’s living room floor. High-definition technology allowed viewers to see that Flo’s eyelids were moving slightly, which implied that she could regain consciousness at any moment. But she hadn’t by the time Wyatt put his keys in the lock, turned the knob, opened the door, and was stunned by what he saw.

B&B pushes the week-ending cliffhangers regularly. The most recent has Brooks’ making an exclamatory statement that was clearly juicy daytime dialogue.

Surely an explanation will be forthcoming, assuming that Wyatt sees Sally and Doctor Penny Escobar (Monica Ruiz) dragging Flo toward the back door of his living room. But since Flo is still unconscious, she’s not a current threat.

Both ladies will claim that they were trying to help Flo, after she suddenly fell. Adding that she hit her head would make sense, considering the big bruise that must exist.

If B&B intends this as the end to the arc, or at least the break point, then Flo will awaken and implicate Sally. But if that doesn’t happen, then Bowden could be seen in a hospital bed for awhile. That would be ironic because Sally was expected to need specialized care in the very near future. That’s why Flo convinced Wyatt to have Sally move out.

Sally could use her adrenaline comeback line with Wyatt, as she did with Flo, when she’s questioned about her ability to move a body. With all that Wyatt’s been willing to accept to-date, it’s reasonable to believe he buys what Sally tells him.

Penny could be on board with backing Sally’s claim that she’s achieved remission, while Flo remains out of it. That would likely happen soon after Flo is hospitalized due to her head trauma and resulting coma.

By using the remission angle, Flo would keep Wyatt’s senses heightened. Doing so would also forward Sally’s goal of trying to revive Wally. As long as Flo doesn’t wake up, that objective is plausible.