The Bold and the Beautiful Spoilers: Friday, January 10 – Hope Lashes Out At Liam – Steffy Kiss Ruins Brooke and Ridge Reunion 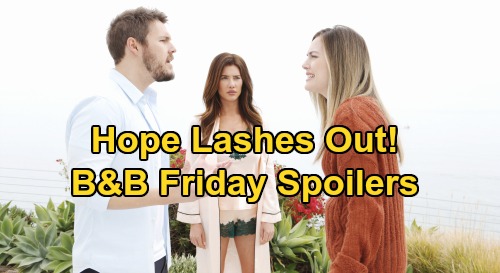 The Bold and the Beautiful spoilers for Friday, January 10, tease that Hope Logan (Annika Noelle) will be horribly distraught. As B&B viewers know, she’s just arrived at Steffy Forrester’s (Jacqueline MacInnes Wood) house to find Liam Spencer (Scott Clifton) and Steffy kissing outside near the cliff. Of course, it didn’t help that Steffy was wearing a slinky nightgown and robe, so Hope may jump to conclusions and think that “Steam” spent the night together.

Whatever the case, Hope looked pretty upset when she saw the kiss occur, and on Friday’s episode, Hope will angrily confront Liam and Steffy at the cliff.

Look for a major confrontation to ensue, as Hope blasts Liam for apparently running right to Steffy for comfort after Hope refused to give up her fashion line and Douglas Forrester (Henry Joseph Samiri) for him. She’ll probably have a few choice words for Liam.

It probably won’t be a good scene out there on the cliff, as Liam tries to explain what happened.

But what will Steffy do while Hope is raging against Liam? She might be feeling awfully guilty, since she did willingly become part of Thomas Forrester’s (Matthew Atkinson) plan.

As B&B viewers know, Steffy kissed Liam at the most opportune time, right when Hope was approaching, after having been signaled by Thomas’ phone call. Will Steffy fess up to what she did?

And of course Thomas will be watching the whole scene unfold from his hiding place. He’ll likely be exuberant as he watches Hope tear into Liam. Certainly, Hope isn’t going to agree to marry Liam anytime soon, let alone agree to his stipulations, now that she’s caught Liam in a lip lock with Steffy.

We’ll see what Thomas does after everything is said and done. He might go congratulate Steffy for her good work!

At any rate, B&B spoilers indicate that Hope will make a huge decision after what she’s seen between Steffy and Liam. The Bold and the Beautiful spoilers say she’ll quickly head to Brooke Forrester’s (Katherine Kelly Lang) place and completely fall apart in her mother’s arms.

It also appears that Hope may storm home and pack Liam’s bags for him, which Brooke will likely advise her against doing. At any rate, it looks like Hope’s dream of being a family with Liam, Beth Spencer (River Davidson and Madeline Valdez), and Douglas won’t be coming to fruition anytime soon.

Meanwhile, on the new episode of B&B on Friday, January 10, Brooke and Ridge Forrester’s (Thorsten Kaye) happily ever after will get squashed. As B&B viewers know, Brooke has just kissed Ridge passionately and asked him to come home. Ridge was thrilled, but he probably won’t be thrilled once Thomas has his way.

The Bold and the Beautiful spoilers indicate that Thomas will do something to sideline Ridge and Brooke’s reunion. It may have something to do with the drama that will be unfolding with Hope, Liam, and Steffy, since Thomas orchestrated that disaster.

Once Brooke learns about Steffy and Liam kissing, she’ll probably have it out for Steffy, which will likely leave Ridge peeved and defending “Steam.”

The Bold and the Beautiful spoilers say fallout from the Steffy and Liam kiss disrupts Brooke and Ridge’s reunion,  it seems pretty clear that Brooke and Ridge are going to face more problems from here, and it might be a long time before Ridge actually comes home.