BY hellodrdavis on January 17, 2020 | Comments: 2 comments
Related : Soap Opera, Spoiler, Television, The Bold and the Beautiful 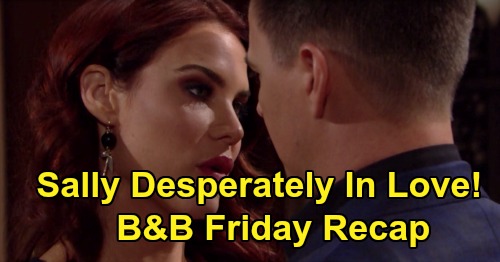 The Bold and the Beautiful spoilers recap for Friday, January 17, reveal that Brooke Forrester (Katherine Kelly Lang) continued her tirade against Quinn Forrester (Rena Sofer) and Shauna Fulton (Denise Richards) in the Forrester living room. She accused Shauna of moving in on Ridge Forrester (Thorsten Kaye), which Shauna flatly denied.

Quinn then wondered why Brooke even cared, given that she kicked him out of her house and signed divorce papers. Brooke yelled that Ridge was still her husband, and Quinn yelled back that Brooke was the person who was demanding that Eric Forrester (John McCook) leave her. The women continued their shouting match when Eric burst in the front door wondering what was going on.

Brooke said that Quinn had attacked her and knocked her off her feet, and Shauna piped up and said that Brooke slapped her. Eric was horrified, and both Brooke and Quinn bashed the other and tried to get Eric on her side. Eric was horrified and couldn’t believe what he was hearing. He turned to Quinn and said that this was not how Forresters behave, and that he certainly didn’t expect this of his wife.

Eric then said that he didn’t approve of violence from either Quinn or Brooke, but that what Shauna had been doing with Ridge upset him. Quinn then piped up and noted that Brooke had barged in their home and ordered Eric around while attacking their marriage, and that it disrespected her.

After more back and forth over the same issues, Eric demanded that Brooke and Quinn stop, that they were both better than this. Quinn then demanded that Eric defend her since she was his wife, and Brooke just flat out refused to apologize for her words. Broke turned to Eric and said that Eric knows her and that they share children together, while Quinn rolled her eyes.

Brooke boldly stated that Quinn was still dangerous and a “toxic mess” who’s no Forrester matriarch. She demanded that Eric take down Quinn’s portrait, and that he had to send Quinn and Shauna packing and tell Quinn she was no longer his wife. Eric looked horrified by this.

Meanwhile, at Spencer Publications, Wyatt Spencer (Darin Brooks) and Flo Fulton (Katrina Bowden) kissed happily. Flo wondered what was going to happen now…with Sally Spectra (Courtney Hope). Wyatt uncomfortably stated that he and Sally hadn’t seen much of each other lately, and that while he’d always care about Sally, he’s felt that something has been off for a while.

Wyatt then explained that Sally recently called him by Liam Spencer’s (Scott Clifton) name, and that it had really bothered him. Flo was quick to point out that she and Liam had no past and that the only Spencer man she had ever wanted was Wyatt.

Next, at Forrester Creations, Zoe Buckingham (Kiara Barnes) and Sally talked in the design office. They spoke a bit about the possibility of the fashion showdown being canceled, and Sally revealed that Steffy Forrester (Jacqueline MacInnes Wood) hadn’t been happy with her recent designs. Sally lamented about possibly losing her job, and Zoe tried to offer her support.

Sally also lamented about how she had been neglecting Wyatt recently, and Zoe suggested that she do something special for him, to let him know how much she cares. Sally thought that was a perfect idea, and she decided to call Wyatt and invite him over to Forrester to jump start their relationship.

Back at Spencer, Wyatt took Sally’s call. She told Wyatt how much she missed him, and that she wanted him to come by Forrester for a meeting. Wyatt said that was good, that he wanted to talk with her, too. Wyatt then told Flo that he was going to see Sally to tell her about what’s happened between them. Flo wished him luck.

Later, Wyatt entered the Forrester design office, and Sally emerged in some slinky lingerie. Wyatt was speechless as Sally told him to lock the door. Wyatt was clearly uncomfortable as Sally explained that she thought it was time that they had a little fun. She told Wyatt that there’s no other man that she’s thinking about, and that she was fully committed to him. She then kissed Wyatt, who was clearly conflicted.