BY Annemarie LeBlanc on January 17, 2020 | Comments: one comment
Related : Soap Opera, Spoiler, Television, The Bold and the Beautiful 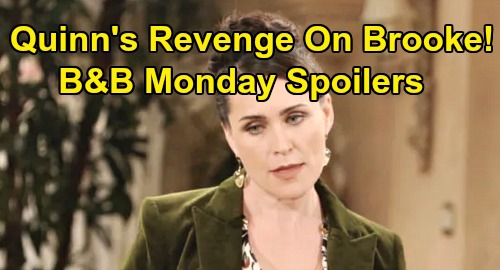 The Bold and the Beautiful spoilers for Monday, January 20, tease that Wyatt Spencer (Darin Brooks) will find himself in quite the predicament. As B&B viewers know, he’s just walked into the Forrester design office to find Sally Spectra (Courtney Hope) wearing slinky lingerie and wanting an impromptu romantic interlude, right then and there.

But Wyatt came to see Sally with another agenda in mind. He’s just reconnected with Flo Fulton (Katrina Bowden) in a big way and the two clearly verbalized that they wanted to be together. On Monday’s episode, Wyatt will take the difficult step of pulling away from Sally and letting her know what’s happened.

Of course, Wyatt won’t know everything that’s going on with Sally behind the scenes. He and Sally haven’t been seeing much of each other lately, so he doesn’t know that she’s in real trouble at Forrester Creations.

Sally is basically on the verge of losing her job, plus she’s been having some health issues that have been seriously interfering with her work.

According to B&B spoilers, Sally will learn in upcoming days that she has a serious illness, and given the way her hands have been trembling, it could be something like Parkinson’s or some other sensory-motor disorder.

At any rate, it’s going to be difficult for her to deal with, and on top of it, Wyatt’s about to tell her that he’s walking out on her and calling off their engagement.

And that means that Sally is going to lose Wyatt, quite possibly her job at Forrester Creations, and her health all in short order. And B&B viewers are going to see the sad series of events kick off on Monday’s episode as Sally listens as Wyatt kicks her to the curb.

But according to The Bold and the Beautiful spoilers, Sally will either not realize what Wyatt is trying to tell her, or she’ll make it quite difficult on Wyatt as he tries to separate from her. Either way, it will become crystal clear to Wyatt just how much in love Sally is, and it will make the breakup that much more difficult.

Meanwhile, on the new episode of B&B on Monday, January 20, it looks like the standoff in the Forrester living room will continue on, with Eric Forrester (John McCook) smack dab in the middle of it.

As B&B viewers know, Brooke Forrester (Katherine Kelly Lang) has just played the “we have kids together” card with Eric, and she’s demanded that he kick both Quinn Forrester (Rena Sofer) and Shauna Fulton (Denise Richards) to the curb.

Well, it doesn’t look like Brooke is going to get her way, at least not on Monday’s episode. But it looks like Eric may want to think about how to handle things.

Now, there’s no indication that Eric is going to just dump Quinn because Brooke told him to, but ongoing B&B spoilers for the week of January 20-24 say that Eric will eventually ask Shauna to leave the mansion.

Quinn’s not going to let that happen, and it looks like she’ll soon formulate some sort of strategy against Brooke.