The Bold and the Beautiful Spoilers: Week of January 20 – Sally’s Terrible Diagnosis – Brooke Gets Her Way, Eric Gives Shauna The Boot 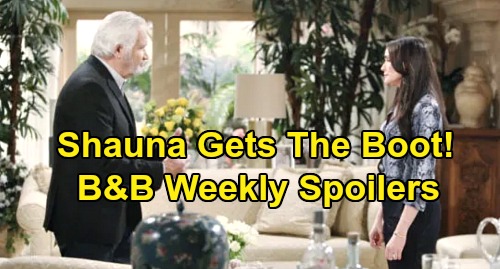 The Bold and the Beautiful (B&B) spoilers for the week of January 20-24 tease that some surprises are in store. First, Hope Logan (Annika Noelle) will find herself crumbling as she deals with her split from Liam Spencer (Scott Clifton).

Thomas Forrester (Matthew Atkinson) may be taken aback when Hope seeks comfort in his arms, but he certainly won’t be complaining! He’ll think everything’s working out perfectly.

Afterward, Thomas will grow worried about secret spillage. He won’t want Steffy Forrester (Jacqueline MacInnes Wood) to reveal that he manipulated the situation and set up that “Steam” kiss.

The Bold and the Beautiful spoilers say Thomas will do his best to bargain with his sister. He’ll hope he can convince Steffy that staying quiet about his involvement is crucial – at least if she wants a true Liam reunion!

Quinn will rant at Eric for surrendering to what Brooke wanted, but she’ll put most of the blame on Brooke for even demanding it.

Later, Quinn will make herself crystal clear to Eric as well as Ridge Forrester (Thorsten Kaye). She’ll insist no one’s going to push her around – especially not Brooke! Quinn and Brooke’s war will continue to heat up, so B&B fans can expect some explosive moments.

Other Bold and the Beautiful spoilers say Sally Spectra (Courtney Hope) will make Wyatt Spencer’s (Darin Brooks) task challenging. She’ll remain madly in love with Wyatt, so the breakup he’s planning is going to be difficult.

As for Sally, she’ll face difficulties of her own thanks to a startling diagnosis. Sally is sick, so she’ll open up to Katie Logan (Heather Tom) about her secret illness and get some advice.

Sadly, Wyatt feels like a Liam cloud’s hanging over their relationship and he still wants “Flo” Fulton (Katrina Bowden). He just won’t envision a future with Sally anymore, so she’ll get dumped at the worst possible time.

The Bold and the Beautiful spoilers say Sally’s got a tough road ahead of her, but Wyatt may change his tune and support her once the truth comes out.

It sounds like some hot drama’s brewing. We’ll give you updates as other B&B news comes in. Stay tuned to the CBS soap and don’t forget to check CDL often for the latest Bold and the Beautiful spoilers, updates and news.