BY hellodrdavis on January 23, 2020 | Comments: one comment
Related : Soap Opera, Spoiler, Television, The Bold and the Beautiful 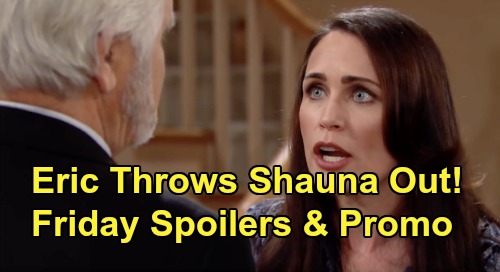 The Bold and the Beautiful spoilers for Friday, January 24, tease that the action is really heating up on the CBS soap. But before we get to that, we have a quick programming note. As you’re probably aware, CBS’s daytime programming has been preempted by the ongoing impeachment hearings. Assuming that CBS releases a new episode on Friday, we’ve got the scoop about what to expect right here.

First off, Steffy Forrester (Jacqueline MacInnes Wood) will be on the verge of telling Liam Spencer (Scott Clifton) all about how she got drawn into Thomas Forrester’s (Matthew Atkinson) scheme to drive a wedge between him and Hope Logan (Annika Noelle).

As B&B viewers know, Steffy kissed Liam at the precise moment that Hope came along…right on cue from Thomas.

Well, now Steffy seems determined to tell Liam the truth. Although she loves having Liam around the house and spending time with him and Kelly Spencer (Zoe Pennington) as a family, she’s been feeling increasingly guilty about why he’s now able to spend so much time with her.

Steffy probably feels that Liam would be with Hope and very likely engaged to be married right now, if not for her decision to go along with Thomas’ scheme.

The Bold and the Beautiful spoilers say that Thomas will step in and interfere with Steffy’s plan to tell Liam the truth. Thomas is well-aware that Steffy feels incredible guilt about what she did, and he’ll do something to keep Steffy from telling Liam exactly how their kiss came about.

We’ll see exactly what Thomas does, but it’s possible that he might drop by Steffy’s place or call at just the right time and interrupt her confession.

It looks like Thomas will know just what to say, too. He’ll end up promising her the outcome she deserves, which is Liam and the chance to have her family back with Liam and Kelly. Of course, Thomas knows that Kelly’s happiness is most important to Steffy, so he’ll say all the right things to keep their secret for now.

Meanwhile, Quinn Forrester (Rena Sofer) will suffer a big defeat in her war against Brooke Forrester (Katherine Kelly Lang). She’ll get summoned for a talk by her husband Eric Forrester (John McCook), during which Eric will tell her that he’s thought it over, and Shauna Fulton (Denise Richards) must move out of the guest house.

Well, that obviously won’t sit well with Quinn, but there won’t be much that she can do about it. She’ll appeal to Eric, noting that by making this decision, he’s just giving Brooke what she wants – and that if he gives her an inch, she’ll just want more.

And Quinn will note that what Brooke really wants is for Eric to get rid of her, too.

For Quinn, this is all about Brooke not respecting her marriage to Eric, and she’ll feel that if Eric gives in to Brooke, then that will send a terrible message about their own marriage.

But Eric will argue that this is about respecting Brooke and Ridge Forrester’s (Thorsten Kaye) union, and that having Shauna living on the same premises as Ridge just isn’t something that he’s comfortable with.

So, even though Quinn will argue that Ridge and Shauna will get together if they choose no matter where they live, Eric won’t give in. He’ll tell Quinn that he insists that Shauna leave as soon as possible, leaving Quinn frustrated and feeling defeated.

But knowing Quinn, this will just be a momentary setback, as ongoing B&B spoilers indicate that she’ll soon go very dark in her fight against Brooke.