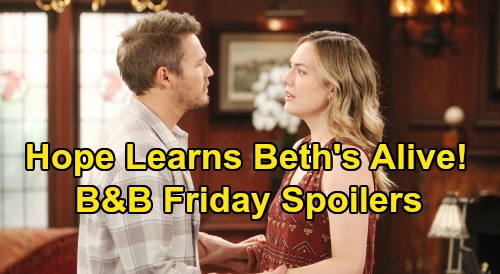 The Bold and the Beautiful (B&B) spoilers for Friday, June 5, tease that viewers will see an encore episode that originally aired on August 5, 2019. The episode is part of “Classic Clashes” week on the show and features the epic battle between Liam Spencer (Scott Clifton) and Thomas Forrester (Matthew Atkinson) that occurred after Liam learned from Douglas Forrester (Henry Joseph Samiri) that Beth Spencer (River Davidson and Madeline Valdez) was alive.

The episode will begin as Steffy Forrester (Jacqueline MacInnes Wood) and Ridge Forrester (Thorsten Kaye) confer at the cliff house. Steffy will be holding “Phoebe Forrester” and she’ll be upset because of how Liam was acting earlier – like Phoebe was Beth.

Ridge will do his best to reassure Steffy that everything is going to be ok, and that Liam is still grieving over losing Beth.

Meanwhile, over at Wyatt Spencer’s (Darin Brooks) place, he and Flo Fulton (Katrina Bowden) will be having a major talk about Flo’s betrayal of Wyatt’s family. Flo will have some serious explaining to do, and Wyatt won’t be in the mood to hear excuses.

Wyatt just won’t be able to wrap his head around how Flo could keep Beth from Liam and Hope Logan (Annika Noelle) and allow Steffy to raise Liam and Hope’s daughter as her own.

Flo will rehash all the details about Reese Buckingham’s (Wayne Brady) baby swap and adoption scam and about how she became involved and got in too deep.

Flo will explain how Reese, Zoe Buckingham (Kiara Barnes), and Thomas Forrester (Matthew Atkinson) had prevented her from telling the truth, even when she wanted to come forward.

It will all be excuses for Wyatt, who will think that Flo should have come to him with the truth. Flo will realize as their conversation progresses that she’s lost Wyatt, and she’ll remark that it really doesn’t matter since she’s going to end up going to jail, anyway.

Flo will think that the important thing now is that Hope and Liam will get their daughter back.

Over at Forrester Creations, a chaotic scene will be unfolding, as Thomas bangs on the CEO office door, with Hope and Liam inside. Liam will be frantically trying to explain to Hope that Phoebe is Beth, but Hope will have difficulty processing what Liam is saying.

Suddenly, Thomas will burst through the door, and he’ll rush up to the pair. Hope will stand between Thomas and Liam, asking Thomas if what Liam is saying is true.

Thomas won’t really answer, and he’ll tell Liam to back off, which Liam will point out isn’t a denial. Thomas will frantically tell Hope not to listen to Liam, and that Liam is a liar.

Liam will then pipe up about Douglas, causing Thomas to punch Liam. Liam will be momentarily stunned on the floor, and Thomas will take the opportunity to drag Hope out of the office.

Thomas will take Hope up toward the roof, where Hope will demand that Thomas let her go. Thomas will urgently implore Hope to listen to him, and he’ll say that he can’t lose her and that he loves her. Thomas will go on, saying that everything Liam told her was a lie, but Hope will call out Thomas on hitting Liam.

Finally, Hope will demand that Thomas tell her the truth about what Liam was saying. Thomas will tell Hope to forget about Beth and Liam. Suddenly, Liam will come out of nowhere and punch Thomas.

After some scuffling, Thomas will escape through a door to the upper rooftop, where he’ll call his helicopter pilot. Liam will attack Thomas, punching him to the ground and putting him into a headlock.

Liam will then force Thomas to tell Hope the truth. Thomas will look at Hope blankly while Liam says that Thomas needs to tell Hope that he’s been lying and was keeping her daughter from her.

Hope will then realize that Beth is actually alive. Thomas will manage to get free from Liam, and he’ll run off, leaving Hope and Liam alone on the roof.

Hope will be in disbelief but overjoyed and crying all at the same time. Hope will cry out that Beth is alive, and Liam will tell her that it’s true. Liam will say that they’ve known her all this time because she was with Steffy, and that Steffy didn’t know she had Beth.

Friday’s encore episode sounds great, so be sure to stay tuned! We’ll give you updates as more B&B news comes in. Stick with the CBS soap and keep CDL bookmarked for the latest Bold and the Beautiful spoilers, updates, and news.