The Bold and the Beautiful Spoilers: Friday, May 22 – Quinn Urges Steffy To Fight For Liam – Ridge Stuns Brooke At Waterfall

BY hellodrdavis on May 21, 2020 | Comments: Leave Comments
Related : Soap Opera, Spoiler, Television, The Bold and the Beautiful 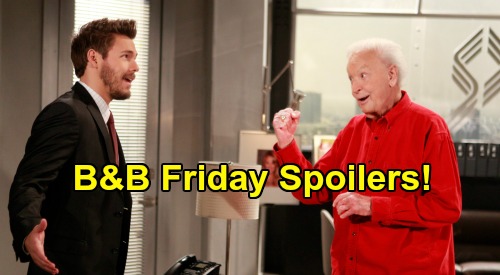 The Bold and the Beautiful spoilers for Friday, May 22, tease that viewers will see an encore episode that originally aired on December 17, 2013, and marked Ridge Forrester’s (Thorsten Kaye) return to Los Angeles. Ridge will first make himself known to Eric Forrester (John McCook), and he’ll explain his prolonged absence.

Ridge will say that he snapped when he found out about Brooke’s texts to Deacon Sharpe (Sean Kanan), and that he shouldn’t have reacted as he did. Ridge will say that Brooke lied to him about the texts, and Eric will point out that she lied because she loved him.

Still, Ridge will say that he had gotten tired of all the problems between himself and Brooke, and he needed time to himself.

Ridge will ask Eric about what Brooke has been up to, and Eric will give him a selected history, leaving out the part about how Brooke had an affair with Bill Spencer (Don Diamont). Ultimately, Ridge will leave to go find Brooke and fix things, if possible.

Hope will say that while it was nice that Wyatt wanted only her, that Liam is “it” for her. Hope will say that Steffy Forrester (Jacqueline MacInnes Wood) is what kept her apart from Liam, but now that’s not an issue anymore.

Talk will turn to how Hope broke the contract between Forrester Creations and Quinn Fuller’s (Rena Sofer) jewelry company, but Hope will remark that Quinn will probably bounce back.

Brooke will doubt that, thinking that the situation could look bad for Quinn’s reputation. That will make Hope feel terrible, but still she’ll think that she made the right decision where the contract was concerned – it was best for her and Liam.

Hope will then tell her mother that she wants to have her wedding near the water staircase, and Brooke will love the idea.

Brooke will note that the waterfall is where she previously reunited with Ridge, after she thought that Ridge was going to marry Taylor Hayes (Hunter Tylo). Brooke will recount the story of how she saw rose petals in the water and Ridge was standing there. After Hope leaves, Brooke will go to the waterfall and sit at the bottom.

Next, in Paris, Quinn will do her best to persuade Steffy to work things out with Liam before he marries Hope. Quinn will think that Steffy should go tell Liam that she is able to have a baby, and that he has a right to know. Quinn will also tell Steffy that Hope had been very attracted to Wyatt, and that Liam shouldn’t be marrying someone who’s attracted to someone else.

Steffy will balk, and she’ll accuse Quinn of only working with her so she can help Wyatt. Quinn will admit it, and she’ll insist that Hope and Wyatt are meant for each other.

Steffy will admit that Liam is the only man she’s ever loved, and Quinn will urge Steffy to get back to Los Angeles and fight for Liam. Steffy will take this all in.

It sounds like a lot of B&B drama is heating up for Friday’s encore episode, so stay tuned! We’ll give you updates as B&B news comes in. Stick with the CBS soap and be sure to keep CDL at the ready for the latest Bold and the Beautiful news.