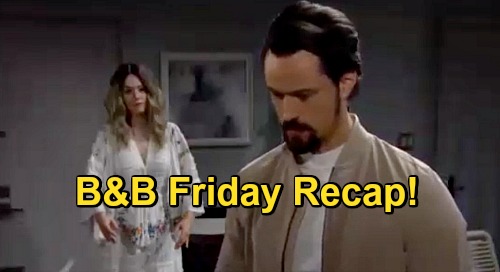 The Bold and the Beautiful spoilers recap for Friday, November 20, reveal that Hope Spencer (Annika Noelle) and Liam Spencer (Scott Clifton) talked at the cabin about the latest Hope For The Future projections, which looked great.

Hope said that she was never more confident in her team, and Liam said that he wished that team didn’t have to include Thomas Forrester (Matthew Atkinson). Hope was sure that Thomas was no longer fixated on her.

Steffy then called Liam, who was still at the cabin with Hope, to remind him about the big beach party for one of Kelly Spencer’s (Colette and Avalon Gray) friends.

Hope happily urged Liam to go spend as much time with Kelly as he could. Talk soon turned back to Thomas, and Liam griped that Thomas hasn’t earned being a bigger part of their family yet, and that personalities don’t change overnight.

Hope responded by saying that Douglas Forrester (Henry Joseph Samiri) needed to have a father that he could count on, and that Douglas and Thomas needed each other.

Hope wondered if Liam even wanted Thomas to get better, and Liam responded affirmatively. Hope said that Thomas was working on being a better man and a better father, and that Liam should go have a great time with Kelly and not worry about Thomas.

Back at the Forrester CEO office, Paris Buckingham (Diamond White) entered as Steffy was exiting. Paris was looking for Zoe Buckingham (Kiara Barnes) and assumed that she must be off with Carter Walton (Lawrence Saint-Victor).

Zende’s face fell at the mention of Zoe and Carter, and Paris wondered what was going on.

Zende covered, saying that he was very happy for Carter and Zoe, and Paris happily said that she was pushing for them to be best man and maid of honor at the wedding. Zende said that Paris was always in a good mood and that she was a positive force.

Zende said that Paris lights up the room, and the he lights up when she enters a room, too. Paris smiled.

“I am here…for you, Thomas,” the mannequin said. Thomas asked what the mannequin wanted from her, and she said, “To not give up on Hope…Free her from Liam.”

Thomas told the mannequin that Hope was happy with Liam and that she had the life she wanted. “If that were true, I wouldn’t be here,” the mannequin said. Thomas then called the real Hope, who was over at the cabin.

Thomas asked Hope if he could have dinner with Douglas tonight and that he’d like to have some time with his son. Hope said that she’d bring Douglas by.

At the cliff house, Steffy and Liam talked about how the beach party went for Kelly and her friends. Liam noted that it was hard being away from Kelly so much, and he and Steffy bonded over their love for their daughter.

Steffy mentioned that Hope, Douglas, and Beth Spencer (River Davidson and Madeline Valdez) were probably missing him by now, and that got Liam all preoccupied with Thomas again.

Liam told Steffy that he was worried that Thomas was getting in Hope’s head again. Steffy said that Thomas couldn’t do that, and that she didn’t even think that was possible. Liam said that guys like Thomas don’t just change overnight.

Back at Thomas’ apartment, Hope and Douglas arrived, with the mannequin now in its box. Thomas showed Douglas a box full of toys, and Douglas happily ripped into the toys.

That was a great episode of B&B, and there’s lots more coming next week. Stick with the CBS soap and don’t forget to check CDL often for the latest Bold and the Beautiful spoilers, updates, and news. We’ll keep you updated throughout the weekend so you don’t miss a thing!