BY Heather Hughes on January 30, 2020 | Comments: one comment
Related : Soap Opera, Spoiler, Television, The Bold and the Beautiful 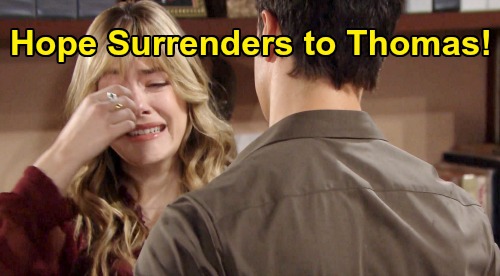 The Bold and the Beautiful (B&B) spoilers tease that Thomas Forrester (Matthew Atkinson) will get a step closer to the life he wants, but he’ll do it by taking step closer to Zoe Buckingham (Kiara Barnes). B&B fans know Thomas actually wants a future with Hope Logan (Annika Noelle), but he’s been forced to work a new angle. Thomas is doing everything he can to convince Hope that his obsession with her is long gone.

During the week of February 3-7, Thomas will have to up the ante. It looks like Thomas will see a roadblock in Carter Walton (Lawrence Saint-Victor), so he’ll try to clear him right out of the way.

Carter will hint to Zoe that Thomas can’t be trusted, so Thomas will turn on the charm and try to pull her closer once again. He’ll hope to eliminate Zoe’s doubts – and perhaps Hope’s doubts in the process.

The Bold and the Beautiful spoilers say Thomas will have success with Zoe, but what about Hope? She’ll find herself shocked by how forward Thomas is about his plans.

Thomas will make it crystal clear that he’s going to have another hot night with Zoe. He’ll basically tell Hope they’re going to steam up the place, so she’ll start to think maybe Zoe and Thomas are a bona fide thing – one that could last.

Thomas should be pleased when he sees Hope’s reaction to his news. Whether it’s all in his head or not, Thomas will probably assume Hope’s jealous. Of course, a little piece of her might be.

The Bold and the Beautiful spoilers say Hope will mull over that devotion, so it could leave her wondering if she should cave in. We have to remember that Hope’s breakup could leave her defenses weakened when it comes to Thomas.

Hope’s all alone while Thomas is pretending to date Zoe and Liam’s falling back in love with Steffy Forrester (Jacqueline MacInnes Wood).

Where does that leave Hope? Thomas is undoubtedly hoping her loneliness will work in his favor. He’d drop Zoe in a heartbeat if Hope would give him a sign that she truly wanted him.

Will Hope be emotionally vulnerable enough to make that decision? It’s a possibility to consider.

If Hope actually lets herself fall for Thomas, that may rev up Steffy’s guilt even more. She might decide enough is enough when it comes to her brother’s twisted manipulation.

Thomas may have to work even harder to keep guilty Steffy from spilling their secret. Can Thomas stop Steffy from derailing his dreams?