The Bold and the Beautiful Spoilers: Hope’s All About Douglas, Beth Forgotten – Upset B&B Fans Call Out Bad Mom, Push for Changes 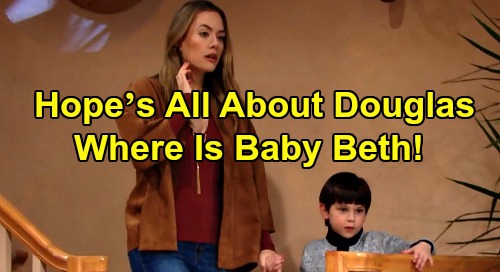 The Bold and the Beautiful (B&B) spoilers reveal that there’s a troubling theme to Hope Logan’s (Annika Noelle) scenes lately – and it’s got many B&B fans upset! Thomas Forrester (Matthew Atkinson) has made it clear that he wants to be a family with Hope and Douglas Forrester (Henry Joseph Samiri). He’s doing whatever he can to tug at Hope’s heartstrings and convince her to do what’s best for Douglas.

So we have to ask…where is Beth Spencer (River Davidson and Madeline Valdez)?! The Bold and the Beautiful viewers are upset since Hope grieved for months and finally found her way to her daughter again. She took Beth back, which left Steffy Forrester (Jacqueline MacInnes Wood) heartbroken.

It was perfectly reasonable for Hope to want her stolen child returned, but most of us at expected to see Hope raising her. It feels like B&B writers are just brushing Beth aside and having Hope be all about Douglas. They’ve turned Hope into a bad mom in many fans’ eyes.

On Twitter, some B&B watchers are speaking out about Hope’s all-about-Douglas mentality and the lack of interest in Beth. “Don’t you have a daughter named Beth that needs her your attention too? Way too much time with Douglas(not her birth son) and not enough with Beth(her birth daughter) IMO,” one fan tweeted.

Another viewer said, “Remember when they just got Beth back? Remember when EVERYTHING was about Beth? ‘We’ll never leave her alone’, they said. So..where exactly is Beth now?” “I hope Liam takes Beth & raises her with Steffy,” one more fan said. “Hope better wake up!!”

There’s obviously a lot of outrage among fans who were invested in the Beth reveal and now feel cheated since Hope isn’t even raising her kid. Beth’s apparently with a nanny most of the time.

Meanwhile, Douglas is all about “Mommy Hope” and Caroline Spencer’s (Linsey Godfrey) memory has been thrown right out the window. That doesn’t seem right either!

It’d be nice if Hope could focus a bit more on Beth, especially since she so desperately wanted her back. What happened to all that time Hope lost and wanted to make up for? She’s missing out on more time now that she’s caught up in Thomas’ twisted web again. Thomas clearly has no interest in making Beth any kind of priority.

The Bold and the Beautiful spoilers, updates and news suggest Hope could find herself on the verge of surrendering to what Thomas wants. If that happens, Hope may see even less of Beth than she does now!

What do you think about Hope’s Douglas obsession and the disappearance of Beth? Do you think B&B writers have turned Hope into a bad mom? CDL will have lots of sizzling B&B updates and news along the way, so be sure to check for Bold and the Beautiful spoilers often.