The Bold and the Beautiful Spoilers: Hope’s New Man, Liam Always Going to Drift Back to Steffy – ‘Lope’ Has No Sizzle? 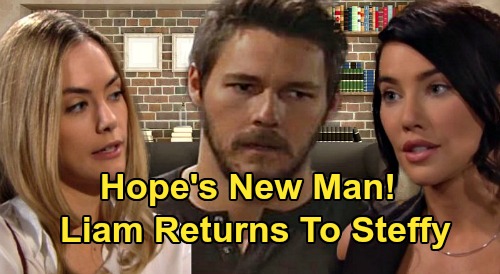 The Bold and the Beautiful (B&B) spoilers tease that Liam Spencer (Scott Clifton) will continue to build a future with Hope Logan (Annika Noelle), but we all know how this ends. Liam can never seem to have a lasting relationship – and that’s because he’s in love with two women: Hope and Steffy Forrester (Jacqueline MacInnes Wood).

Romantic shakeups are an inevitable part of soap operas, but Liam takes it to the extreme. He’s spent so many years going back and forth between the two loves of his life. Liam may be content with Hope for now, but his bond with Steffy isn’t going away. Steffy’s a huge part of Liam’s history and will always have a place in his heart.

Hope herself pointed out that Steffy was the problem the last time she dumped Liam. Although Thomas Forrester (Matthew Atkinson) certainly caused issues, Hope felt like Steffy was at the core of the “Lope” drama. That may be the case as long as Liam and Hope are together.

Doesn’t it seem like Hope’s inevitably going to face the same old scenario? Liam’s always going to drift back to Steffy! He’s proven it time and time again. There’s always a lot of debate about who Liam really belongs with, but Steffy is arguably a better match.

Maybe The Bold and the Beautiful should put Liam back with Steffy and let “Steam” reign supreme. If B&B writers could ditch all the flip-flopping, Liam and Steffy could finally have a shot at making this last. Could Steffy and Liam have a forever kind of love? If Liam can truly close the door on Hope, it might be possible.

Many B&B fans have been rooting for Steffy to get a new man, but that’s mostly because Liam never treats her right. Would you change your mind if Liam straightened up and showed Steffy true devotion? If Liam learned to leave Hope out of the equation, “Steam” might gain support again.

Of course, that presents an opportunity to flip the script! What about giving Hope a new man and letting her be the one to move on from Liam? The truth is Liam and Hope are a rather dull couple. There’s no sizzle because they have such similar personalities. Since Steffy can shake things up and make a Liam pairing interesting, “Steam” provides more excitement than “Lope.”