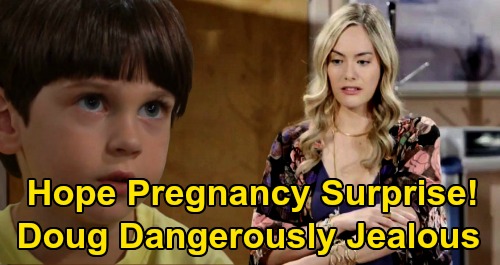 The Bold and the Beautiful (B&B) spoilers tease that Liam Spencer (Scott Clifton) and Hope Logan (Annika Noelle) will enjoy their sweet reunion, but what’s next for this happy couple? They’re finally on the other side of some tough drama, so this is their chance to get their future back on track.

Hope, Liam, Beth Spencer (River Davidson and Madeline Valdez) and Douglas Forrester (Henry Joseph Samiri) are all a happy family now, but happiness doesn’t last forever on soaps! There are bound to be more problems, but maybe Liam and Hope could get some pleasant yet complicated news first.

Since Hope and Liam are settled in this romance again, could B&B throw another baby bomb at them? What if Hope gets pregnant again? Now that Douglas is in the picture along with Beth, there are clearly enough kids here. Liam is also a co-parent to Kelly Spencer (Colette and Avalon Gray), so how would he react if Hope had another bun in the oven?

Chances are good Liam wouldn’t be too thrilled at first! However, birth control can fail sometimes – especially on soap operas. If it happens, it happens. This would be a pretty interesting curveball since Hope was so desperate to get Beth back. If Hope were to get pregnant again, she might have more kids than she could handle running around!

There would also be concerns since Hope’s had a miscarriage before and had complications during Beth’s birth. Although Beth survived and was ultimately returned to her, Hope still grieved that loss for months and truly believed she lost her daughter.

There’s a certain amount of trauma that comes along with an experience like that – and Hope can’t shake it just because she got a Beth reunion.

Even so, Liam and Hope could work through their issues in time. Once Liam wrapped his head around the idea of another kid, he’d undoubtedly get on board. Likewise, Hope could overcome her fears and start preparing for a new bundle of joy. T

his would be Hope and Liam’s opportunity to know and love their baby from day one. They were robbed of that chance when Beth was stolen from them.

Unfortunately, this could lead to major Douglas trouble. The Bold and the Beautiful spoilers say Douglas will show a very different side of himself down the road. It certainly sounds like Douglas will act out and become a darker version of himself.

Could Douglas get jealous if Hope has another baby on the way? If Hope were to be expecting a son, that could really rile Douglas up! Douglas was the hero in bringing Beth back to “Lope,” so he’s cool with her. This new addition might not be as welcomed, particularly if it’s another little boy to compete for Hope’s attention.

Douglas could follow in his devious father’s footsteps if he’s not watched closely. Thomas Forrester (Matthew Atkinson) hasn’t been a good example, so there could be serious concerns here. Douglas might do something to sabotage Hope’s potential pregnancy. Could Douglas cause a miscarriage for Hope and bring devastation?

Escape to Monte Carlo next week with #BoldandBeautiful! Experience all of the glamour and exclusive behind-the-scenes moments in a special week of thrills and romance. ✨ Don’t miss it! pic.twitter.com/hO65Hqla2y