The Bold and the Beautiful Spoilers: Impeachment Trial Preemptions Schedule – What B&B Fans Can Expect 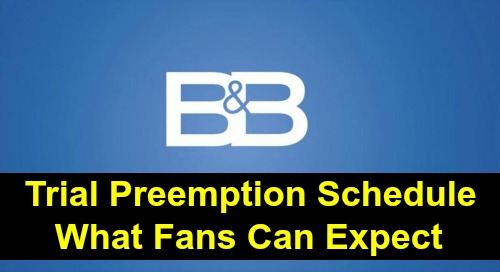 The Bold and the Beautiful (B&B) spoilers reveal that the impeachment trial will affect the show’s schedule. Since it looks like CBS has news coverage planned, B&B may be preempted in many or even all areas. The show hasn’t made an official announcement about what they plan to do yet, but we’ll definitely keep you updated on that as we hear more details.

B&B has some options to consider as this trial gets underway. It’s possible they’ll try to air episodes when they can. Sometimes there are breaks in the schedule, so that might allow them to show at least portions of an episode and post the rest online.

Of course, The Bold and the Beautiful could also just post the show online no matter what. That might be a smart tactic since it appears to be Days of Our Lives’ current plan. DOOL shouldn’t fall behind since fans can still keep up with the episodes on NBC’s website and app.

However, CBS tends to do things a little differently. It’d be great if The Bold and the Beautiful followed suit and still let fans watch the episodes, but there are no guarantees. B&B may choose to hold the episodes back for when they can air them in their regular timeslot.

If that’s the case, B&B could end up delaying a few weeks of episodes as part of this extended news coverage. It’s all still up in the air, but the show will hopefully lock in a firm plan soon. Bottom line, you can probably expect preemptions, but it’s not yet known whether the episodes will be pushed back or posted online.

On the bright side, The Bold and the Beautiful spoilers say some hot drama’s ahead either way. Quinn Forrester (Rena Sofer) and Brooke Forrester (Katherine Kelly Lang) have declared war, so their feud is bound to get nasty!

As for Thomas Forrester (Matthew Atkinson), he’ll do his best to keep Steffy Forrester (Jacqueline MacInnes Wood) from blowing up her reunion with Liam Spencer (Scott Clifton).

Thomas has a lot riding on Liam and Steffy’s future. If he can keep Liam focused on Steffy instead of Hope Logan (Annika Noelle), that’d certainly help Thomas’ mission to win Hope for himself.