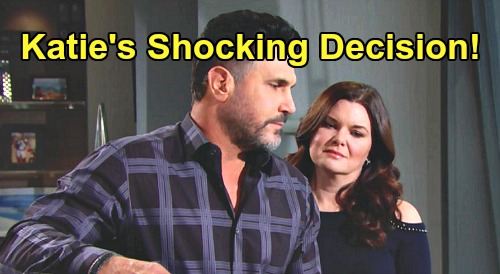 The Bold and the Beautiful spoilers tease that Katie Logan (Heather Tom) has been considering the future of Batie for a much longer period of time than she and the fans originally anticipated. A decision would likely have been seen in late April, or by May, but the production shutdown has delayed this inevitable outcome.

Bill Spencer (Don Diamont) has been patiently waiting the entire time. He hasn’t been living in his home, having chosen to move out in order to give Katie space and now an extended amount of time.

Either-or choices seemed to be Katie’s only options. But there is a surprising decision she could deliver to Bill if B&B writes her character in that direction.

Katie and Bill love each other. Tom’s character also has no concerns about Bill’s influence in their son’s, Will Spencer (Finnegan George), life. The ongoing issue at hand is a pattern of repeated behavior that’s linked to her sister, Brooke Logan (Katherine Kelly Lang).

Why has Bill given into his impulses on so many occasions? He’s not able to answer that serious question, but only provide apologies and make promises.

So, a realistic scenario can have Katie tell Bill that she’ll enter therapy sessions with him, while remaining separated.

Bold And The Beautiful Spoilers – A Conditioned Separation

Katie wouldn’t tell Bill that they’re through, or that she wants him to move back into the house while therapy sessions begin. Instead, an indefinite period of time would start where they seek input and advice from a professional.

The psychological issues that Bill needs to first understand and then address are surely complex. But the potential for him to recognize the source of his problems and then work toward solutions with Katie’s support would create the potential for lasting change.

Bold And The Beautiful Spoilers – Batie Is Worth Saving

Bill needs help, which is why Katie’s effort to seek solutions would be digestible to the audience. While he removed his sword necklace, the Dollar Bill persona has been lingering inside him.

The effects of whatever happened to Bill through the years and the way in which he’s chosen to live his life has jeopardized Katie and Will’s stability in recent times. Suggested therapy would give Bill a chance to right what’s wrong and create the opportunity to strengthen his relationship with the woman he loves and their son.