BY hellodrdavis on May 5, 2020 | Comments: Leave Comments
Related : COVID-19 NEWS, Soap Opera, Spoiler, Television, The Bold and the Beautiful 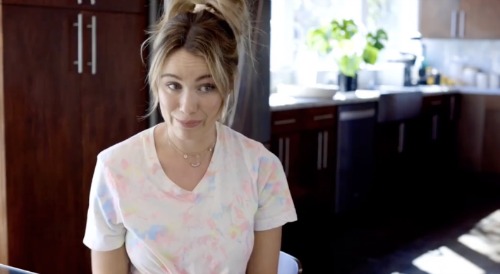 The Bold and the Beautiful spoilers document that Katrina Bowden’s (Flo Fulton) Instagram time travel video is a must see. The actor, who joined the cast of B&B created a four-minute epic that masterfully addresses the effects of the pandemic on everyday life.

Bowden said, “Had some stuff to tell Katrina from four months ago…I’m probably not the first to visit my past self, and I probably won’t be the last #january2020 #tomypastself @julienolke for the original time travel idea.”

Julie Nolke, whose Instagram account was referenced by Bowden in the quote, is an actor, writer, and comedian who created and posted a time travel video of herself on the social media platform on April 9. That video surely served as the source Bowden’s inspiration, with imitation being a sincere form of flattery in this instance.

Bowden appears in her kitchen in January 2020, when a future version of herself arrives. May 2020 Bowden tells her younger self that she can be glad to have taken that trip to Thailand when she did.

The future version of Bowden tells her younger self that she won’t think everyone who was wearing masks in various countries was unusual in retrospect.

The future Bowden then sits down at the kitchen table with the slightly younger version of herself and explains some of the changes, using props, that are about to happen in her life. Viewers will laugh, while also realizing that they, like Bowden, are living what has become very real with the COVID-19 pandemic.

It should be noted that Bowden focuses on what life will soon be like for the January 2020 version of herself without directly mentioning the COVID-19 virus. Bowden’s dark humor approach can be rightly tagged as creatively brilliant, as Nolke’s was.

Another actor and a B&B cast mate, Annika Noelle (Hope Logan), offered a number of complimentary replies to Bowden’s post, including saying, “This is amazing!!!!”, followed by multiple laughing so hard that they were crying emojis, along with heart emojis.

Bowden replied to Noelle saying, “lol thanks babe…I miss acting can you tell?”, followed by a slightly sideways laughing and crying emoji.

Bowden actually replied to numerous other people who commented on her post, which reinforced the connectivity social media allows during this most unusual time in everyone’s lives.

Bold And The Beautiful Spoilers – Meanwhile Flo Fulton Is Unconscious

The teased cliffhanger will likely linger for many months until production can begin again in Los Angeles, California. So, fans probably won’t learn Flo’s fate until sometime this summer, hopefully.

I’m not the first to visit my past self, and I probably won’t be the last #january2020 #tomypastself @julienolke for the original time travel idea☄️