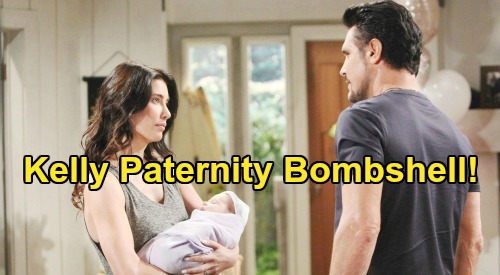 The Bold and the Beautiful (B&B) spoilers reveal that one CBS soap star would like to see some story shakeups. In a recent live-tweet, Don Diamont (Bill Spencer) responded to viewers who had lots of questions about pairings and possibilities. One of those questions involved a paternity bombshell that a fan expressed interest in.

“How do you think Ridge would react to $Bill being revealed as Kelly’s real father?” a B&B viewer asked Diamont on Twitter. “That would definitely bring the fireworks right? Bill & Steffy deserve their shot!” Diamont had an enthusiastic reaction to the whole scenario. “I would love that!” Diamont replied.

We want to focus on the paternity part here since that would be the true shocker. Could Kelly Spencer (Avalon and Colette Gray) actually be Bill’s biological daughter? Liam was proven to be the father thanks to a DNA test, but any soap fan will tell you the results are never reliable!

That’s especially true since Bill was lurking near the lab at one point. It seemed like B&B left the door open for altered DNA test results one day.

Of course, there’s no guarantee that The Bold and the Beautiful will ever revisit Kelly’s paternity, but they could certainly could. There are only so many times you can do these same love triangles, so B&B might go for something different if things start getting too stale. Having Liam find out Kelly is actually his half-sister would be so soapy! 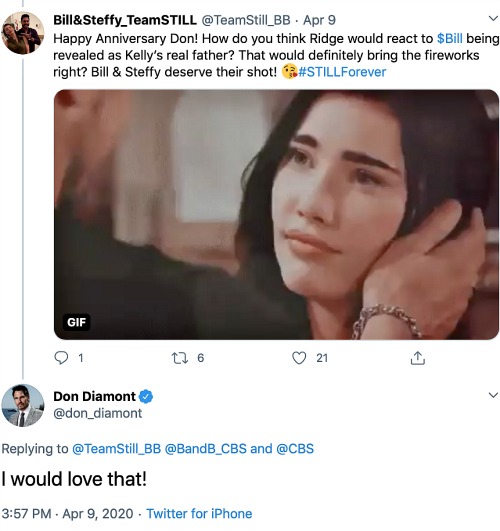 That’s the kind of storyline that could drive drama for months and give the actors some solid material for their Daytime Emmy reels. Like that fan mentioned, can you imagine Ridge Forrester’s (Thorsten Kaye) reaction? Liam, Ridge, Steffy and so many others would be lining up to blast Bill for changing the DNA results. There’d also be the potential for a custody battle and a major Liam-Bill war.

How would you feel about B&B changing Kelly’s paternity? Don Diamont is certainly all in on the option! It’s something fun to ponder as we consider what the future might hold.