The Bold and the Beautiful Spoilers: Liam Chooses Steffy, But Brooke Fights for Hope’s Future – ‘Steam’ Moves in Front, ‘Lope’ Behind 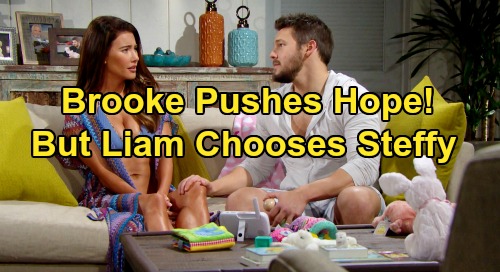 Liam won’t think he can hold Steffy Forrester (Jacqueline MacInnes Wood) responsible either. It’s not like Liam’s lips were held captive. Steffy initiated the kiss, but Liam could’ve dodged it or pulled away.

Liam chose to kiss back – and it was indeed that: a choice. He’ll feel like he has to accept responsibility for what he did. Thomas didn’t force Liam into this lip lock.

Of course, Liam might change his mind after he finds out Thomas orchestrated it, but the point stands. The Bold and the Beautiful fans know Liam was completely in control of his own actions. He’ll think it’s time to just move on since Hope made it crystal clear where she stands.

Hope isn’t up for another round of battling it out for Liam’s heart. She feels like Steffy’s always going to come between them. It’s safe to say Steffy’s right since Liam tends to drift back in Steffy’s direction – just like he’s doing right now.

Now that Hope’s no longer a barrier, Liam will quickly let himself fall in love again. He shares a child with Steffy and she’ll forever have at least part of his heart.

However, B&B spoilers say Brooke will remain as stubborn as ever! She’ll still be upset over Shauna Fulton (Denise Richards) making moves on Ridge Forrester (Thorsten Kaye), so that may fuel her stance on this “Steam” situation.

Brooke will maintain that Thomas is the source of all this trouble. She’ll undoubtedly think Liam should fight for Hope and put any lingering Steffy feelings aside.

It doesn’t look like that’s something Liam will be willing to do right now, but that won’t stop Brooke from thinking she can tell him what to do! The Bold and the Beautiful spoilers say some great drama’s ahead, so stay tuned.