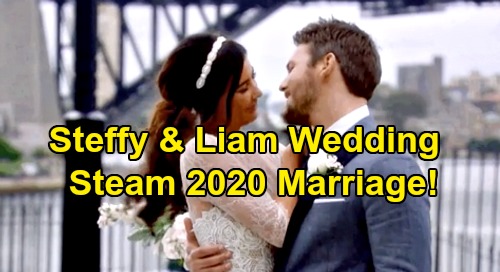 The Bold and the Beautiful (B&B) spoilers tease that Steffy Forrester (Jacqueline MacInnes Wood) will soon be out of romantic limbo. B&B fans know Steffy signed up for a dating app, but nothing’s really come of that. The show seems more interested in putting Steffy back together with Liam Spencer (Scott Clifton), which means Steffy’s more interested in that, too.

Steffy recently shared a kiss with Liam, but she isn’t providing the full story. There could be a few bumps in the road due to Thomas Forrester’s (Matthew Atkinson) involvement and the secrets Steffy’s keeping with him.

Even so, Liam and Steffy seem to be the couple B&B’s going with. They’ve done about all they can do with Liam and Hope Logan (Annika Noelle) right now, so back to “Steam” it is!

Although many Bold and the Beautiful fans would like to see Steffy get a new man, there are certainly still some “Steam” supporters. There are also some viewers who used to love “Steam” and have now abandoned ship, so maybe they can at least appreciate having Steffy and Liam’s chemistry.

Regardless, the “Steam” train’s rolling in, so B&B’s probably hoping people will get on board.

Liam’s biggest problem is staying committed to one woman, but maybe he’ll stick with Steffy longer than usual this time. They’ve been bonding for a while now, and Liam reciprocated that kiss. It’s only a matter of time until Liam and Steffy reconnect in the bedroom.

From there, Liam may decide he doesn’t need to fight this. He may feel like this is his chance to get back the united “Steam” family he once lost.

Once Liam knows this is what he wants, will he quickly take the next step? Liam’s latest proposal to Hope was brought on by Thomas and included stipulations. Not exactly romantic! Perhaps Liam’s next one will be a bit more legit.

Liam may pop the question to Steffy after realizing she’s who he truly desires. Since there’s so much history between them, Liam may not drag his feet this time around. Things could be shaping up for a “Steam” wedding in 2020, so we’ll see if Liam and Steffy make plans for their nuptials soon.