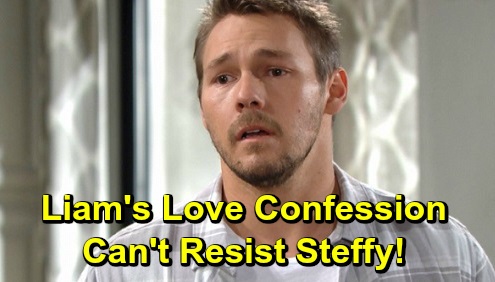 The Bold and the Beautiful (B&B) spoilers tease that Liam Spencer (Scott Clifton) will have a confession to make. After Thomas Forrester (Matthew Atkinson) sets his new plan in motion, a manipulated Steffy Forrester (Jacqueline MacInnes Wood) will make her move with Liam. She’ll initiate a kiss, but it looks like Liam will gladly reciprocate.

Thanks to Thomas, Hope Logan (Annika Noelle) will have a clear view of this lip lock. She’ll be torn apart when she sees Liam and Steffy smooching, so B&B fans can expect a heated confrontation. Of course, Liam’s proposal stipulation will play a huge role in the conflict. Since Hope will be unwilling to give up Douglas Forrester (Henry Joseph Samiri), she may think Liam wasted no time in moving on.

Liam will likely insist it’s just something that happened, but does that excuse ever really fly? Kisses don’t just happen! No matter who starts a lip lock, the other person can always dodge it or pull back immediately. Since Liam isn’t going to do that, it says a lot about what he feels for Steffy.

The Bold and the Beautiful spoilers say Hope will really struggle in the aftermath of all this. However, Liam could do some struggling as well. He may have to reevaluate the nature of his relationship with Steffy and figure out what he wants moving forward.

Hope could make it easier for Liam if she’s the one to walk away, but he still needs to sort through his feelings. During the week of January 13-17, Liam will make a major admission. Will that involve Steffy? Could Liam admit he’s still in love with her or at least that he’s in love with both Steffy and Hope?

It’d be a classic Liam move if he confessed his undying love for Steffy and then acted like he still had to fight for his current relationship. When it comes to women, Liam can never pick a lane and stay in it for long! It’s also possible Liam will come clean to Hope or someone else about his love for Steffy. He may admit it’s something he’s been trying to shove down.