The Bold and the Beautiful Spoilers: Monday, December 28 Recap – Liam Freaks As Thomas Moves In – Zoe Gets Unexpected News 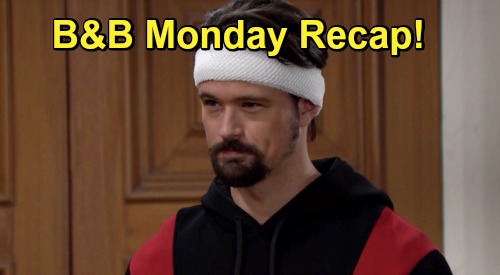 The Bold and the Beautiful spoilers recap for Monday, December 28, reveal that Ridge Forrester (Thorsten Kaye) and Brooke Forrester (Katherine Kelly Lang) talked at their mansion.

Ridge asked Brooke to let Thomas Forrester (Matthew Atkinson) stay with them while he recovers. Brooke seemed hesitant, but just then Steffy Forrester (Jacqueline MacInnes Wood) and Thomas walked in the front door.

Thomas, who was wearing a headband from his brain surgery, wondered why Steffy had brought him to Ridge and Brooke’s house. Brooke said that it would be a good idea for Thomas to stay with them while he healed.

Ridge beamed at Brooke, and Thomas said that this meant a lot to him. Brooke noted that Douglas Forrester (Henry Joseph Samiri) had missed Thomas, and Thomas said he couldn’t wait to give Douglas a big bear hug.

Liam flashed back to his betrayal of Hope with Steffy, as Hope mentioned that she wanted to put “that terrible night” behind them – meaning the night that Liam thought he saw Thomas kiss Hope.

Hope then got a text from Brooke wanting her to come up to the house, and Liam said that he was lucky to have Hope and that he was happy in their marriage.

Hope said that she’d never question Liam’s love and devotion, making Liam feel miserable. Hope left, and Liam about melted down out of his overwhelming guilt.

Back at Brooke and Ridge’s mansion, Brooke expressed kindness to Thomas, and Thomas thanked Brooke for being so understanding and for inviting him to stay there.

Hope breezed in the side door, and she was happy to see Thomas. Hope quickly learned that Thomas was staying in the main house for a while.

Brooke then announced that as Hope’s mother and Beth Spencer’s (River Davidson and Madeline Valdez) grandmother, she’d always be cautious toward Thomas, but that she’d like to move past that.

“I just need some reassurance that you’re no longer obsessed with my daughter,” Brooke said. “I want to know that you accept that Hope and Liam are married and are committed to each other.”

Back at the cabin, Steffy arrived to see Liam, and she filled In Liam on the fact that Thomas will be staying at the main house for the time being. Liam freaked out, saying that now he had to deal with Thomas and be reminded of that awful night over and over.

Liam and Steffy then argued about whether Liam would keep the secret, and Steffy told Liam to stop torturing himself and stick with the plan.

“I’m lying and deceiving her – I can’t keep living this way,” Liam wailed, saying that he just wanted to blurt out the truth. Steffy said that no good would come of that, but Liam insisted that Hope has earned the right to hear the truth and that he was going to tell her…today.

Zende Forrester Dominguez (Delon de Metz) walked up and said that he was hoping that Paris would stay in Los Angeles.

Zoe continued to hint that Paris could get a job outside of Los Angeles, and Paris said that she had gotten a few job offers but that nothing felt right yet. “You have your whole life ahead of you – you can live anywhere in the world,” Zoe urged.

Zende talked up Paris’ qualifications, and just then Carter Walton (Lawrence Saint-Victor) entered, saying that he was going to make Zoe’s day even better.

Carter and Zoe headed to the Forrester design office, where Carter gushed about his big surprise. “It could be wonderful for you and Paris,” Carter said.

That piqued Zoe’s interest, and Carter said that he had a long talk with Paris, and that her nonprofit experience could he useful there at Forrester Creations. Zoe was completely taken aback.

Over in the Forrester CEO office, Paris entered, having been summoned by Ridge. Paris wondered why Ridge wanted to see her, and Ridge asked her to describe her charitable and social justice work. “Fill me in,” Ridge said hopefully.

That was a fantastic episode of B&B, and there’s plenty more coming tomorrow on the show, so stay tuned! Keep checking back with CDL fo all your Bold and the Beautiful spoilers, updates, and news. We’ve got you covered!