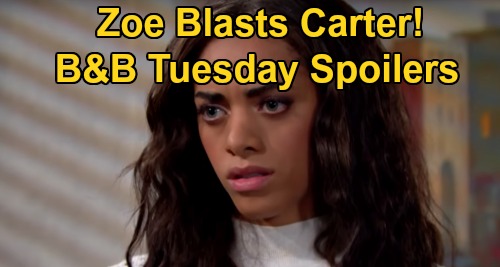 The Bold and the Beautiful spoilers for Tuesday, December 29, tease that Zoe Buckingham (Kiara Barnes) will have a big reaction to Carter Walton’s (Lawrence Saint-Victor) news about her sister Paris Buckingham (Diamond White).

As B&B viewers know, Paris is currently in talks with Ridge Forrester (Thorsten Kaye) about possibly becoming the next director of the Forrester Charitable Foundation. That’s going to thrill Paris.

But Zoe isn’t going to be pleased to hear about the news from Carter, it seems. According to The Bold and the Beautiful spoilers, Zoe will have a very displeased reaction when Carter tells Zoe that he convinced Ridge and Eric Forrester (John McCook) to seriously consider Paris to run the Forrester Foundation.

Zoe’s going to be horrified, and she’ll want Carter to immediately rethink his decision.

Of course Zoe has been increasingly feeling smothered by having Paris around all the time. It seems that Paris is constantly hanging around Forrester Creations, which irritates Zoe.

And now that it looks like Paris and Zende may be becoming more than friends, that’s rubbing Zoe the wrong way, too. Zoe has had some unacknowledged feelings for Zende, and she doesn’t like it that Paris is invading that relationship, too.

Anyway, The Bold and the Beautiful spoilers say it seems that Carter is going to get quite an earful from Zoe as she reacts very badly to the news about Paris.

Meanwhile, on the new episode of B&B on Tuesday, December 29, Liam Spencer (Scott Clifton) will start to unravel as a result of the guilt he’s carrying around due to his affair with Steffy Forrester (Jacqueline MacInnes Wood).

As B&B viewers know, Hope Spencer (Annika Noelle) keeps praising Liam as a great and loyal husband, and Liam’s about to come apart at the seams.

Liam feels that Hope deserves to know the truth about his affair with Steffy, and of course Steffy is pressuring Liam to brush the whole situation under the rug and forget about it. It doesn’t look like that’s going to be possible, though, as Liam will feel the crushing weight of his guilt.

Of course, it doesn’t help that Liam is now faced with Thomas Forrester (Matthew Atkinson) living on the same property as himself and Hope. Liam now has a constant reminder of that fateful night when he saw Thomas kissing the Hope mannequin and jumped to conclusions, leading to his affair with Steffy.

We’ll see if Steffy is able to convince Liam to hang on and keep the secret for a while longer.

Ongoing B&B spoilers say that the secret will eventually come to light, but it won’t happen for a while, indicating that Steffy will have some success as she insists that Liam keep his mouth shut and protect both his relationship with Hope and her relationship with John “Finn” Finnegan (Tanner Novlan).

Tuesday’s episode of B&B is going to be great, so tune in! Remember, CDL is here for you with all the latest Bold and the Beautiful spoilers, updates, and news. We’ve got you covered on all the soaps!