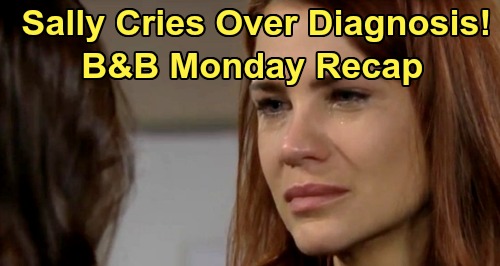 The Bold and the Beautiful spoilers recap for Monday, February 10, reveal that Wyatt Spencer (Darin Brooks) continued his conversation with Bill Spencer (Don Diamont) at Spencer Publications. Wyatt was feeing terrible about hurting Sally Spectra (Courtney Hope), and he noted that it seemed like Sally was hiding something really important.

Bill tried to comfort Wyatt, saying that he never set out to hurt Sally, but Wyatt lamented that he’s now left Sally for Flo Fulton (Katrina Bowden) twice, and that he and Flo are taking things slow to make things easier on Sally. Bill reminded him that he’s not responsible for Sally’s well-being and said that he was proud of Wyatt for being such a good person. But he noted that Sally is s born survivor, and that she’d be ok.

Flo then walked in the mansion to see Quinn and Shauna, and Quinn immediately pounced on Flo, wondering when she and Wyatt were going to get married and settle down. They talked a bit about Sally, and Flo relayed how Sally still hasn’t really accepted the breakup, and she mentioned Sally’s visit to her apartment.

Quinn noted that Sally’s job at Forrester Creations was really going downhill lately, and that if she loses her job, it could be the last they see of Sally. After Flo left, Quinn and Shauna noted that their kids turned to great, but that Wyatt really needed to get over the coddling of his ex- fiancé.

Flo then headed to Spencer Publications, where she found Wyatt in Bill’s office. She told Wyatt that she had just come from hanging out with their moms, and that Quinn was having a hard with Sally’s unwillingness to let him go. Wyatt then lamented about how much Sally was going through, and that there seemed to be something she wasn’t telling him.

Flo kindly said that she was in no rush, and that they had plenty of time ahead of them. She stated that they could take the time to be compassionate people, and Wyatt thanked her for letting him figure out how to help Sally through this.

Meanwhile, back at the hospital, Sally cried in utter devastation at her diagnosis. Dr. Escobar gently advised her to make a plan and get a support system in place for herself, and to consider telling her family and closest friends. But Sally insisted that she had to control who knows about this, and that only the people in this room could know.

Sally asked Dr. Escobar if there was really no treatment plan, and Katie asked if it were true that there were really no clinical trials that Sally could be a part of. Dr. Escobar said that she could go on a regimen of medications to keep her comfortable and make the quality of her life better, and perhaps give her extra time.

Dr. Escobar then left the room, and Sally started crying again. Katie consoled her and urged her to fight and to get a second opinion. Katie tried to get Sally to see that she was surrounded by people who love her, and that she can’t go through this on her own. But Sally fired back that Katie wasn’t hearing her, and that she didn’t want to be the object of anyone’s pity.

Through tears, Sally said that she just wanted to keep living as long as she can, and Katie persisted, saying that she needed to let Wyatt be there for her. Sally refused, saying that she loves Wyatt too much to do that do him, and that Katie couldn’t tell anyone. Katie pledged to be with Sally every step of the way and urged her to let people in.

Katie noted that she wasn’t going anywhere, and that she’d be with Sally every step of the way. “I will be here as your friend and confidante for whatever time you have left,” Katie said as the two women hugged sadly.