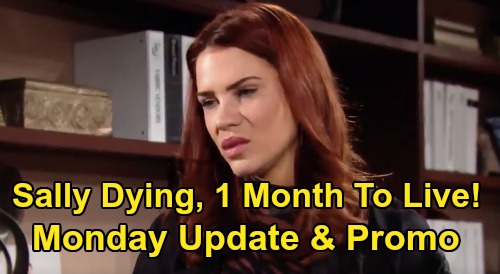 The Bold and the Beautiful (B&B) spoilers update for Monday, February 10, teases that Sally Spectra (Courtney Hope) will finally learn her devastating test results. She suspected things would be bad, but she has no idea just how bad they’ll be! As Katie Logan (Heather Tom) remains on hand to offer support, Sally will get updates on her serious illness. Unfortunately, it’s one she can’t conquer according to her doctors.

Dr. Escobar (Monica Ruiz) will fill Sally in on her exact diagnosis and what it means for her future. Sadly, it means Sally doesn’t have much of one. It turns out Sally is dying – and fast! In B&B’s weekly preview video, Sally reflects on her awful situation. “One month…that’s all I have left,” Sally says.

The Bold and the Beautiful spoilers say Dr. Escobar will explain everything to Sally as best as she can. It’s never easy to give someone such crushing news.

The shock and pain in Sally’s eyes will be evident, but all Dr. Escobar can do is be straight with Sally and show compassion. She’ll want to balance softening the blow with still being clear about Sally’s condition.

Katie’s heart will break as Sally refuses to pursue treatment, but it sounds like that treatment wouldn’t do much good anyway. It might buy Sally a little more time, but she won’t be keen on wasting what time she has left.

Sally surely won’t want to spend her final days sitting in a hospital or treatment center. She’ll want to keep living he life normally for as long as she can, which obviously isn’t long.

The Bold and the Beautiful spoilers say Katie will do whatever she can to console Sally. She’ll promise she’s in Sally’s corner and will remain there throughout this losing battle.

Over with Quinn Forrester (Rena Sofer), she’ll be ready to get the marriage show on the road. Quinn will urge Flo Fulton (Katrina Bowden) to rope Wyatt Spencer (Darin Brooks) into a wedding immediately.

Since Flo and Wyatt are meant to be in Quinn’s eyes, she won’t see why they should wait. Flo will probably insist that Wyatt just broke up with Sally – or at least tried to.

Flo may contend that they’re technically still engaged and need to finish sorting things out. Of course, Quinn will argue that marrying Wyatt right away would send a clear message. She won’t want Sally to stand in their way.

However, Sally’s illness will have a profound impact on Wyatt. His heart will shatter once Katie eventually spills the beans, so stay tuned for that in the coming episodes.

We’ll keep you posted as other B&B details emerge. Stick with the CBS soap and don’t forget to check CDL often for the latest Bold and the Beautiful spoilers, updates and news.

Sally receives her diagnosis this week on #BoldandBeautiful. RT if you're rooting for her to win this fight. 💙 pic.twitter.com/goMWozFx2D