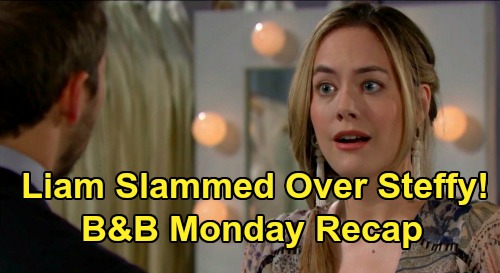 But Brooke insisted that it was all a ruse, exasperating Ridge, who argued that Thomas had changed. Brooke said that she didn’t think she’d ever be able to trust Thomas again.

Meanwhile, Thomas was working on some designs backstage when Liam Spencer (Scott Clifton) approached. As Hope Logan (Annika Noelle) listened from behind a rack of dresses, Thomas deduced that Liam was back again to put him on notice and to tell him that everything he’s doing is to affect Hope.

Hope then made herself known, followed shortly by Zoe, who arrived just as Liam was telling Hope that Thomas was using Zoe.

Zoe then quizzed Thomas, asking if Liam’s right. Thomas said that after Caroline Spencer (Linsey Godfrey) died, Hope made sense, but that the “Hope chapter” of his life is now over, and that romantically he’s moved on with Zoe. Zoe seemed to buy it, which caused Liam to roll his eyes.

Meanwhile, Wyatt Spencer (Darin Brooks) talked with Flo Fulton (Katrina Bowden) at her apartment. They rehashed Sally Spectra’s (Courtney Hope) terminal condition and lamented about how unfair it was for Sally.

Wyatt wondered what he could do for her, and Flo suggested that he go to Sally and offer his friendship so that perhaps she’d open up to him.

Wyatt wondered if Flo would really be ok with that, and she said that he needed to do it. Flo stated that Sally shouldn’t have to spend this dark time by herself, and that she didn’t mind waiting to be with Wyatt – after all, they have their whole lives ahead of them and Sally doesn’t.

Wyatt insisted that no matter what, Flo was in his heart and he loved her, but that he was going to do whatever he could to make sure that Sally wasn’t alone in her struggle.

In the Forrester design office, Sally was trying to concentrate on work when Katie Logan (Heather Tom) came in wondering how she was doing. She wondered if Sally had scheduled her follow-up appointment yet, and Sally said that she didn’t see the point.

Katie insisted that Sally needed to fight, but Sally said it was her life and that she was going to decide how it ended.

Katie then shared her experiences after Will Spencer’s (Finnegan George) birth when she pushed everyone away. She said that she was miserable and should have let her friends and family help her. But Sally insisted that she didn’t want anyone’s pity, and especially not Wyatt’s pity.

Sally then grimaced in pain with a headache, and Katie urged her to go to the doctor and get some meds to be comfortable. But Sally said that she didn’t want to cloud the time she had left, and she started to stand up but nearly fell over, with Katie catching her.

Later, after Katie had left, Sally sadly sat on the couch in the design office and contemplated her situation.

Back in the CEO office, Brooke and Ridge continued their argument over Thomas. Thomas eavesdropped at the door, and Brooke saw him and beckoned him in the room. Thomas denied eavesdropping, and Brooke immediately lashed out, saying that she and Ridge were having a terrible time…all because of him.

Brooke accused him of keeping her apart from Ridge, just as he’s keeping Hope and Liam apart.

Brooke went on about the sham birthday party for Zoe and about how Thomas was manipulating Douglas Forrester (Henry Joseph Samiri), all of which Thomas denied.

Ridge finally stepped in and told Brooke that she had no idea how it made him feel when she attacks Thomas. Brooke fired back that he’d see someday that she was right all along.

Back down in the backstage area at Forrester, Hope and Liam talked alone. Liam tried again to tell Hope that Thomas was still all about her, but Hope said that she didn’t really buy it. Liam was incredulous, and Hope accused him of thinking she was either naive or stupid, which he denied.

Liam said that he missed hanging out with her and Beth Spencer (River Davidson and Madeline Valdez), and Hope insisted that what was keeping them apart was his kiss with Steffy Forrester (Jacqueline MacInnes Wood).

Hope accused Liam of being the one who was obsessive…over Thomas. Liam said that Thomas is succeeding in driving a wedge between them, and then Hope fired back that even if Thomas does have ulterior motives, at least she wouldn’t walk in and find him kissing another woman…at least he’d be fully committed to her.

Liam reeled and said that he heard Hope, but that she needed to hear him, too. He begged her not to let Thomas suck her back in with his lies. He begged her to tell him that she remembers who Thomas is and that he’s not getting to her. Hope didn’t immediately answer, and Liam shouted, “Hope, tell me!”

That was a great episode of B&B, and we’ll give you updates as more B&B news comes in. Be sure to keep watching the CBS soap and check back with CDL for the latest recaps, spoilers, and news.