The Bold and the Beautiful Spoilers: Sally Wins – Wyatt Falls Back In Love, Flo Loses – B&B Fans Fed Up with Flo’s Victim Act? 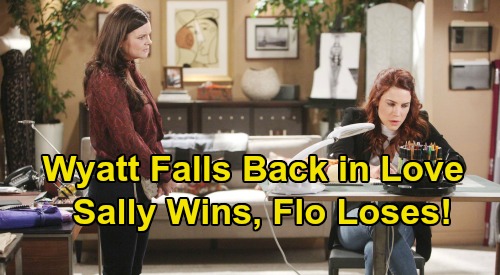 The Bold and the Beautiful (B&B) spoilers reveal that fans are growing frustrated over a pattern with one particular character. B&B fans know Flo Fulton (Katrina Bowden) posed as Beth Spencer’s (River Davidson and Madeline Valdez) birth mother. She was huge part of the stolen baby circle and caused great pain by keeping quiet.

Flo battled guilt and was sorry, but that doesn’t erase what she did. Nevertheless, B&B tried to take the redemption route by having Flo save Katie Logan’s (Heather Tom) life. Katie has now pushed for forgiveness on Flo’s behalf. Unfortunately, all the Flo propping has never gone over well with many viewers.

Of course, we’re gearing up for more of it thanks to this Sally Spectra (Courtney Hope) situation. The Bold and the Beautiful spoilers suggest Flo will make another one of her grand sacrifices and push Wyatt Spencer (Darin Brooks) back to Sally.

Some Bold and the Beautiful watchers feel like the show’s pushing this “Flo’s the victim” angle too hard and making the character unlikable.

Are you tired of Flo and all her sacrifices? Many B&B fans are on Twitter! “I can’t wait for Flo to give Wyatt to Sally,” one viewer said sarcastically. “Organs and boyfriends… she will sacrifice anything like the saint she is. Pose as a stolen baby’s mother you say? No she did not says Brad Bell.”

“They should have made Flo a full blown unapologetic villain to give her a damn personality,” another fan insisted. “But she’s just basically BASIC Hope 3.0.” “I don’t care how many body parts she gives up or how much faux sympathy she has for Sally,” said one more irritated viewer.

Sometimes it feels like The Bold and the Beautiful writers are trying a little too hard to make Flo happen. There’s a right way and a wrong way to handle the introduction of a new character. Flo’s introduction arguably wasn’t handled very well. B&B updates and news point to another Flo pity party down the road.

All this sacrificial Flo business has left some fans wishing she would be written out instead of Sally – although it’s looking increasingly likely that Sally may actually survive.

With that in mind, other fans are hoping Wyatt might genuinely fall back in love with Sally. She deserves better than Wyatt, but at least she’d come out a winner for once! Maybe Sally could beat this illness and get her man back, too.