The Bold and the Beautiful Spoilers: Monday, January 13 – Hope Runs to Brooke, Breaks Down Over Liam Split – Steffy Hears Confession

BY hellodrdavis on January 10, 2020 | Comments: 2 comments
Related : Soap Opera, Spoiler, Television, The Bold and the Beautiful 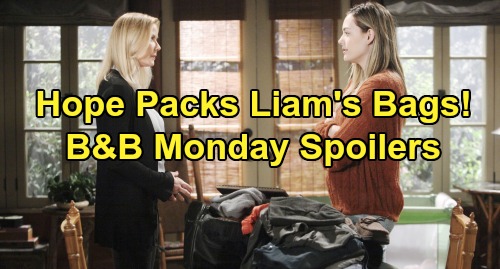 The Bold and the Beautiful spoilers for Monday, January 13, tease that Hope Logan (Annika Noelle) will race back home after the confrontation at the cliff house. As B&B viewers know, Hope just told Liam Spencer (Scott Clifton) that their relationship was over after witnessing Liam and Steffy Forrester (Jacqueline MacInnes Wood) kissing on the side of the cliff. Hope wasn’t amused by the scene and didn’t take it lightly.

Well, it seems that Hope will head home and meet up with her mom, Brooke Forrester (Katherine Kelly Lang). According to B&B spoilers, Hope will break down in her mother’s arms as she recounts what she witnessed between Steffy and Liam, while Brooke offers her comfort.

Hope truly believes that her relationship with Liam is kaput, and it looks like Hope may even go so far as to pack Liam’s bags for him.

Of course, Thomas Forrester (Matthew Atkinson) witnessed the whole scene on the cliff, so he’ll probably be thrilled with how everything worked out. As B&B viewers know, he orchestrated the whole thing, even enlisting Steffy to kiss Liam right on cue, when Hope was approaching the cliff.

Thomas will likely be thrilled by his handiwork, as things worked out just like he hoped.

Steffy, however, will apparently be feeling quite guilty about her role in the Lope breakup. She, of course, made the decision to kiss Liam at the last minute and was clearly struggling with whether she should go through with it.

But Steffy was clearly complicit in Thomas’ plot, and B&B spoilers say that she’ll be feeling pretty remorseful about the whole thing as she tries to comfort Liam.

Liam and Steffy will probably spend some time talking on Monday’s episode, and Steffy will likely be apologetic, although Liam won’t know that Steffy was in on Thomas’ plan.

Liam will just think that Steffy is sorry for kissing him and precipitating Hope’s tirade and breakup with Liam. It doesn’t look like Steffy will come clean with Liam.

The Bold and the Beautiful spoilers indicate that as Steffy and Liam talk and commiserate, Liam will make a big confession to Steffy. Might he tell Steffy that he’s still in love with her?

Liam readily admitted to Hope on the cliff the he still loved Steffy, so perhaps he’ll take the opportunity to tell Steffy how much she means to him. If he does, then that will probably make Steffy feel even guiltier.

Or perhaps Liam’s confession will have something to do with his relationship with Hope. He might confess that things never would have worked out between himself and Hope, given her insistence in co-parenting Douglas Forrester (Henry Joseph Samiri).

Liam has said from the beginning that he didn’t feel comfortable taking on a third child, so he might express relief that he won’t be partially responsible for Douglas in addition to his two girls.

Of course, Liam loves Douglas, and it’s not that he doesn’t want to see Douglas taken care of. But he’s never felt that he and Hope were the right people to raise Douglas. After all, Douglas has a whole host of Forrester family members around him. At any rate, Liam will share something important with Steffy, who will surely do her best to comfort him.

Liam will surely be broken up about what’s just happened with Hope, and he’ll need a place to stay now, which will probably end up being Steffy’s place. We’ll see if he goes to Hope and tries to work things out, or whether he resolves that this is the end of their relationship – after all, Hope made it clear that she wouldn’t sever ties with Thomas, which seems to be a deal breaker for Liam.