The Bold and the Beautiful Spoilers: Steffy Risks Heart with ‘Steam’ Reunion – Is Liam Capable of Staying Away From Hope?

BY Heather Hughes on January 10, 2020 | Comments: one comment
Related : Soap Opera, Spoiler, Television, The Bold and the Beautiful 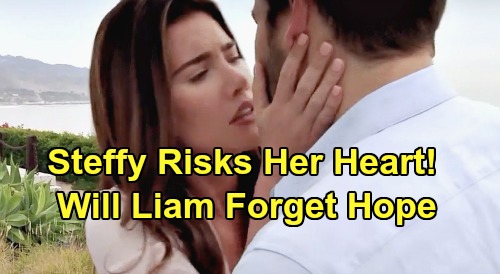 The Bold and the Beautiful (B&B) spoilers tease that the writing’s on the wall for the end of ‘Lope.’ Liam Spencer (Scott Clifton) and Hope Logan (Annika Noelle) won’t be able to hold onto what they used to share after the ‘Steam’ kiss fiasco. The story’s shifting back to Liam and Steffy Forrester (Jacqueline MacInnes Wood), which is obviously not what many Steffy fans want to see.

Steffy could use some fresh blood and a new beginning. Hope too for that matter! The “Steam” and “Lope” triangle has been the focus on and off for years.

However, this is the direction B&B’s going in, so we’ll just have to make the best of it. Liam isn’t the perfect guy, but he’s obviously who’ll be paired with Steffy in the months ahead.

With that in mind, there’s an important question to ask: Is Liam capable of change? In the past, Liam has waffled incessantly just like he’s doing right now. Since Steffy and Liam are gearing up for a reboot, maybe the character of Liam could use a bit of a reboot, too.

Scott Clifton is a popular soap actor, and Liam is certainly the leading man of The Bold and the Beautiful. If the show’s going to do “Steam” again, they need to do it right. That means pulling Liam away from Hope and letting him commit to Steffy 100 percent. No more waffling!

There’s still an opportunity for Liam to reform and perhaps work well with Steffy if he’s written as someone truly devoted. It’ll take time for Liam to prove himself, but it’d be nice of B&B could just stick to one pairing for a while.

Even though most Steffy fans would rather see her find a new hunk, there’s a bright side to this looming Liam reunion. It’ll make Steffy happy and reunite their family with Kelly Spencer (Zoe Pennington). Perhaps some new “Steam” storyline opportunities can come out of their renewed bond.

It’ll probably just be a matter of time until Liam reverts to his true waffling self, but let’s hope he can do some soul-searching and commit to being a better version of himself – at least for a while! Do you think Liam is capable of change? Can he step up and be a real man for Steffy?