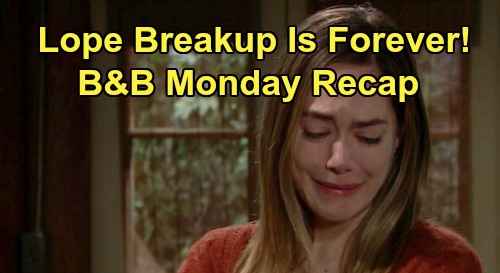 The Bold and the Beautiful spoilers recap for Monday, January 13, reveal that Hope Logan (Annika Noelle) fought back tears as she returned to the cabin and packed Liam Spencer’s (Scott Clifton) things. Soon, Brooke Forrester (Katherine Kelly Lang) came in, and Hope explained that she had broken up with Liam. Brooke assumed it was due to Liam’s ultimatum, but Hope revealed that it was because she had walked in on Liam kissing Steffy Forrester (Jacqueline MacInnes Wood).

Brooke tried to talk Hope out of making a rash decision, but Hope’s mind was made up, and she was particularly bitter that Liam had wanted her to abandon Douglas Forrester (Henry Joseph Samiri), then turned around and kissed Steffy. Brooke even seemed to change her stance, saying that it was time for Thomas Forrester (Matthew Atkinson) to care for Douglas, but Hope wouldn’t budge.

Meanwhile, at the Forrester mansion, Ridge Forrester (Thorsten Kaye) encountered Shauna Fulton (Denise Richards). He was still frustrated with Brooke and deeply worried about Steffy getting hurt when Liam and Hope get engaged. He shared with Shauna that Steffy still loved Liam, and he quickly excused himself to call Thomas.

He happened to catch Thomas as he was lurking around Steffy’s house, trying to eavesdrop on Steffy and Liam, who were now inside the cliff house talking. Ridge told Thomas to be there for his sister, since it looked like Hope and Liam would be engaged by the end of the day. Thomas told Ridge not to worry, that he would make sure that Steffy was ok.

Ridge then turned back to Shauna, who quickly put him at ease. He wondered why Brooke couldn’t take the weight off of his shoulders the way that she did. Shauna said that it was called friendship, and that she meant it when she said that she’d be there for him.

Next, inside Steffy’s house, Liam lamented what had happened and Steffy tried to comfort him, while Thomas listened from outside. Liam made sure that Steffy knew that he didn’t blame her for what had happened, which made Steffy feel guilty.

Steffy said that surely Hope would forgive him, and with a guilty conscience Steffy started rambling and gearing up to confess what she had done.

Of course, Thomas could hear all of this, and he quickly sent Steffy a text message telling her not to say anything and to come outside the front door to talk. After another text message, Liam figured he was keeping Steffy from work and went out the back door to think.

Steffy then went outside the front door and caught up with Thomas, who blasted her for nearly spilling the beans. Steffy was peeved that Thomas was spying on them, and they proceeded to argue about what they had done. Thomas told Steffy not to feel bad, as she has just as much right to Liam as Hope does.

Steffy noted that it was nice seeing Liam snuggled up next to Kelly Spencer (Zoe Pennington) this morning, and Thomas said she could have lots more of those moments, and that together they could build a future for their respective families – and that he would do most of the heavy lifting. “Make it happen with Liam,” Thomas told Steffy. “Take your family back.”

Finally, Liam moped out by the cliff as he looked into the ocean, while back at the cabin, Hope took a walk by herself and sadly remembered her history with Liam.