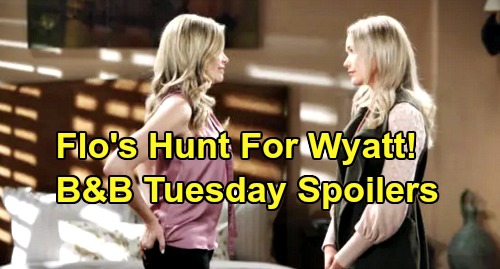 The Bold and the Beautiful spoilers for Tuesday, January 14, tease that Steffy Forrester (Jacqueline MacInnes Wood) will get back to work at Forrester Creations, and she’ll probably need the distraction after the huge scene that recently unfolded on the cliff with Liam Spencer (Scott Clifton) and Hope Logan (Annika Noelle).

Unfortunately, though, it looks like Steffy’s work respite will only cause her discomfort, as she’ll quickly encounter a problem with Sally Spectra (Courtney Hope). According to B&B spoilers, Steffy will find herself seriously worried when she sees Sally’s designs for the upcoming fashion showdown.

As viewers know, the fashion showdown will pit Steffy’s new line against Hope For The Future. Sally is Steffy’s designer, and they’ve been having some difficulties connecting when it comes to the designs.

Steffy seems to have been giving Sally lots of notes and changes, but Sally hasn’t been incorporating those changes to Steffy’s liking.

The Bold and the Beautiful spoilers say Steffy will be disappointed in Sally’s work, so much so that she’ll worry about their ability to win the fashion showdown.

Steffy certainly doesn’t want to hand Hope and Thomas Forrester (Matthew Atkinson) a win, so she’ll probably voice her concerns to Sally loud and clear – we’ll see how Sally responds to that.

Meanwhile, on the new episode of B&B on Tuesday, January 14, Shauna Fulton (Denise Richards) will spend some time with Flo Fulton (Katrina Bowden). As B&B viewers know, Flo has been off canvas for several weeks, so this episode will mark Flo’s return as she’s been recuperating from her kidney donation surgery.

At any rate, it seems that Shauna and Flo will catch up, and the conversation will eventually turn to Flo’s goals for the future.

It looks like Flo will admit to her mom that she’s still very much in love with Wyatt Spencer (Darin Brooks), and that she’d love to rekindle things with him. But she might be feeling discouraged about that, since she knows that Wyatt is engaged to Sally.

It seems, though, that Shauna won’t see Sally as a major impediment to Flo’s happiness, and she’ll tell Flo to go after Wyatt with everything she has.

Flo may hesitate, especially after everything she did as part of Reese Buckingham’s (Wayne Brady) baby swap and adoption scam. She knows that the Logans still have a serious problem with her, but it seems that Shauna will tell her to keep the faith.

After all, Flo doesn’t need to persuade the Logans, she just needs to persuade Wyatt to take her back, and the rest can work itself out.

Finally, on Tuesday’s episode Katie Logan (Heather Tom) will make a special request that leaves her friends and family wondering what’s going on. It appears that Katie will have something important to discuss, and that she’ll want to gather the people closest to her for a meeting.

Interestingly, Flo and Wyatt will be included, which may give the two of them the opportunity to reconnect, just as Shauna wants.

We’ll see what Katie has in mind for this big meeting, but ongoing B&B spoilers for later in the week indicate that Katie will have a special request that no one saw coming, and that she’ll offer an apology to her friends and family for some reason.

One wonders what Katie would feel she needs to apologize for, but chances are it will have something to do with her recent brush with death, which likely made her reflect on her life.