The Bold and the Beautiful Spoilers: Hope Falls Into Thomas’ Arms After Lope Breakup – Turns To Liam’s Enemy For Comfort

BY hellodrdavis on January 13, 2020 | Comments: 2 comments
Related : Soap Opera, Spoiler, Television, The Bold and the Beautiful 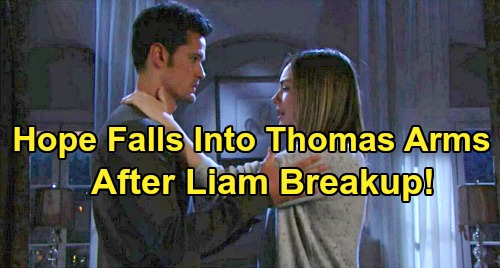 The Bold and the Beautiful (B&B) spoilers tease that Thomas Forrester’s (Matthew Atkinson) plan will ultimately work just as he hoped. As B&B viewers know, he’s been manipulating and scheming in order to get closer to Hope Logan (Annika Noelle). He set up the whole fashion showdown scenario, making himself necessary for her to not only win the competition but to keep her clothing line.

Well, Hope responded to the situation just as Thomas wanted her to. She convinced Liam Spencer (Scott Ciifton) that she needed to work with Thomas in order to save Hope For The Future, and he reluctantly agreed to the situation.

The situation ended up causing serious tension between Hope and Liam and paved the way for Thomas to pull his next stunt, which led to a major scene at Steffy Forrester’s (Jacqueline MacInnes Wood) house.

As B&B viewers know, Thomas overheard Hope tell Brooke Forrester (Katherine Kelly Lang) that she was going to go to Steffy’s house and do everything she could to reunite with Liam.

So Thomas enlisted Steffy to in his plot, and Steffy kissed Liam on cue, just when Hope was arriving at the house. It was a terrible scene, but it all worked out just as Thomas hoped, with Hope pretty much deciding on the spot to split with Liam.

The Bold and the Beautiful spoilers say that Hope and Liam will ultimately break up, and Hope will be seriously distraught. And in her grief over the end of her relationship, she’ll turn to Thomas, winding up in his arms for comfort.

And of course, Thomas will be right there for her, working closely with her at Forrester Creations on the fashion showdown and maintaining contact with her outside of work as they co-parent Douglas Forrester (Henry Joseph Samiri) together.

Of course, Liam probably won’t give up on his relationship with Hope that easily, so he’ll still be on the scene, thing to talk some sense into Hope.

But it seems that he won’t know that Thomas orchestrated the whole situation at Steffy’s house, as B&B spoilers indicate that Thomas will continue to pressure Steffy to keep the secret about how she kissed Liam on cue.

And without that critical piece of information, it doesn’t look like Liam will be able to persuade Hope to rethink her decision to split.

At any rate, for the time being it looks like Thomas is going to get his way, and with Liam out of the picture he’ll probably be able to inch closer and closer to Hope over time.

Do you think that we’ll eventually see Hope and Thomas as a couple? Stay tuned to B&B and don’t forget to check CDL often for the latest Bold and the Beautiful spoilers, updates, and news.