BY Heather Hughes on January 13, 2020 | Comments: one comment
Related : Soap Opera, Spoiler, Television, The Bold and the Beautiful 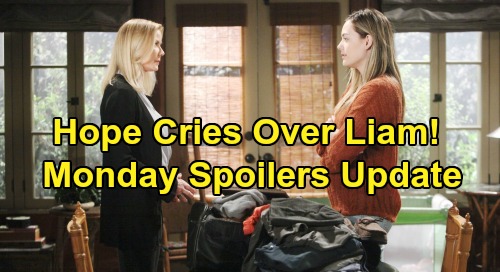 The Bold and the Beautiful (B&B) spoilers update for Monday, January 13, teases that Brooke Forrester (Katherine Kelly Lang) will hear a shocking story. Hope Logan (Annika Noelle) will run crying to her mom after that horrible ordeal outside the cliff house.

Liam Spencer’s (Scott Clifton) kiss with Steffy Forrester (Jacqueline MacInnes Wood) brought Hope to a major realization. She now understands that Steffy’s always going to come between them if she remains in a relationship with Liam.

That’s why Hope declared she couldn’t do this anymore and stomped off. Hope’s done sharing a man with Steffy, but that won’t make her heartbreak any easier. Brooke will console Hope, who’ll break down in a flood of tears and spill all the details.

Hope will accept Brooke’s warm embrace and try to deal with this breakup as best as she can. Of course, Brooke won’t like the idea of Steffy being the winner here.

Brooke may urge Hope to cool off and eventually hear Liam out. Brooke will be livid with Liam and Steffy for kissing in front of Hope, but she’ll probably remain a big believer in “Lope’s” love. She may be in denial about Liam’s lingering love for Steffy, but Hope certainly won’t be.

The Bold and the Beautiful spoilers say Hope will be adamant that Steffy loves Liam and always will. She won’t think they’re ever going to have any kind of trust between them. Besides, Hope isn’t willing to give up being a mother to Douglas Forrester (Henry Joseph Samiri).

Since that’s a dealbreaker for Liam, Hope may tell Brooke her split from Liam was inevitable anyway.

Meanwhile, Steffy will battle guilt for blowing up Liam and Hope’s relationship. She won’t really be sorry they’re over, but she’ll hate that she played a role in Liam’s pain.

Steffy cares about Liam’s heart and knows it’ll need to mend. After Steffy apologizes for the part she played in driving Hope away, Liam will make a stunning admission.

Will Liam confess that he’s relieved by this breakup? Liam may admit that as hard as this is, it was what needed to be done. He may feel like Steffy simply expeditated the process.

Liam could also confess that he enjoyed the kiss and wanted to do it – just like Hope said. Whatever the case, B&B spoilers say Steffy should feel a little better about the situation after Liam comes clean.

Back with Hope, she’ll be next to a partially packed suitcase as she vents to Brooke at the cabin. It looks like Hope will go ahead and begin packing up Liam’s stuff. She won’t want Liam living there a minute longer since Steffy is clearly the one he wants.