BY hellodrdavis on January 20, 2020 | Comments: 2 comments
Related : Soap Opera, Spoiler, Television, The Bold and the Beautiful 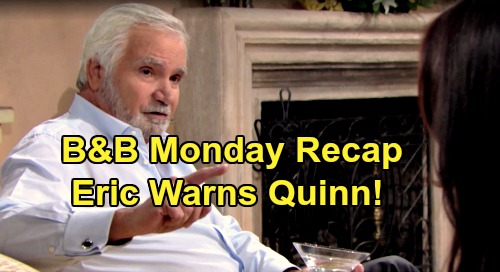 The Bold and the Beautiful spoilers recap for Monday, January 20, reveal that Brooke Forrester (Katherine Kelly Lang) continued her tirade against Quinn Forrester (Rena Sofer) and Shauna Fulton (Denise Richards) in the Forrester living room. She told Eric Forrester (John McCook) that he needed to open his eyes and see that Quinn tricked him into marriage, and that Shauna was repaying his hospitality by going after Ridge Forrester (Thorsten Kaye).

Brooke insisted that both Quinn and Shauna had to go. Eric then addressed Brooke, saying that he was appalled that Quinn had struck her, but that he wasn’t going to end his marriage – he loved Quinn, and nothing was going to change that.

Brooke then said that she’d fight with everything she has to protect Eric from Quinn, and to protect her marriage to Ridge. That prompted Quinn to say that Brooke didn’t know the meaning of the word “fight” until she tangled with her…so Brooke needed to back off or suffer the consequences.

Meanwhile, at Forrester Creations, Sally Spectra (Courtney Hope) kissed Wyatt Spencer (Darin Brooks) and told him that she wanted to show him how much she’s missed him.

Wyatt tried to get a word in edgewise as Sally went on about how they needed to make each other a priority again. Finally, Sally realized that Wyatt had something important to say, and that it was not going to be good.

Wyatt then explained about the meeting that Katie Logan (Heather Tom) called, and how she wanted everyone to forgive Flo Fulton (Katrina Bowden). He then dropped the bomb that he was still in love with Flo and that he wanted to try to make it work with her again.

Sally fumed that Wyatt was dumping her for Flo again, and Wyatt protested that he never meant to hurt her.

Sally then hurriedly dressed and ranted about how things were already on the downswing for her, since she was in danger of getting canned from Forrester. She declared that she wasn’t going to let Wyatt leave her, and that he did it once already and it was a mistake.

Sally said he just couldn’t dump her for Flo, and that she wasn’t going to let him leave her that easily. And with that, she walked out the door, leaving Wyatt speechless.

Next, at Spencer Publications, Katie asked Bill Spencer (Don Diamont) if he’d be able to forgive Flo, and he said that he was worried that Katie would end up disappointed after putting her faith in Flo.

Flo then walked in and offered Katie another thank you. She said that Katie’s acceptance and support could be changing her life right now, since it looked like she and Wyatt were getting back together.

Bill and Katie were surprised by that, and Bill said that he just wanted Wyatt to be happy, and that he’d never been a big Sally fan. Flo noted that he wasn’t a big Flo fan either, but that she’d work to change that.

Later, Katie arrived at Brooke’s place and learned the whole story about Shauna’s kisses with Ridge, and about that huge scene with Quinn at the Forrester mansion. Brooke ranted and raved about Shauna and Quinn, hurling insults and calling them names, which stunned Katie.

Brooke selectively left out some details as she told Katie that Quinn had struck her and knocked her to the ground. Horrified, Katie listened as Brooke stated that she and Quinn were at war.

Meanwhile, at the Forrester mansion, Quinn handed Eric a much-needed martini as they decompressed after the big scene with Brooke. Eric noted that he was angry with Quinn and that he couldn’t believe that she hit Brooke.

Quinn noted that Brooke started it when she slapped Shauna, and that she felt as if she were under attack. Eric wanted Quinn to be the bigger person and warned Quinn not to interfere in “Bridge’s” marriage.

Later, Quinn and Shauna regrouped over some wine and talked about the confrontation with Brooke. Quinn noted that Brooke has no idea who she’s messing with, but she lamented about how upset Eric was with the whole thing.

Shauna thought it was good that Eric hard ultimately stood up for Quinn, but Quinn maintained that she’d have to stay on her toes now.

Quinn then told Shauna that she was going to stay in the guest house as long as she pleased, and the Brooke wouldn’t get away with attacking her marriage to Eric. Quinn vowed to take care of Brooke once and for all.